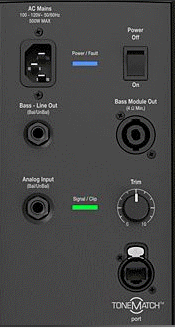 For connecting the T1 ToneMatch Audio Engine to the L1 Model II.

The port sends electrical power to the T1 and accepts digital audio from the T1. 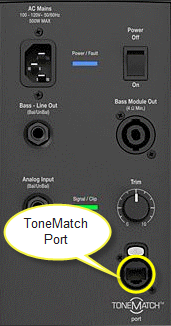 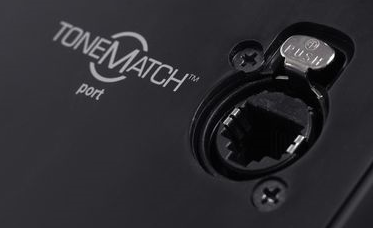 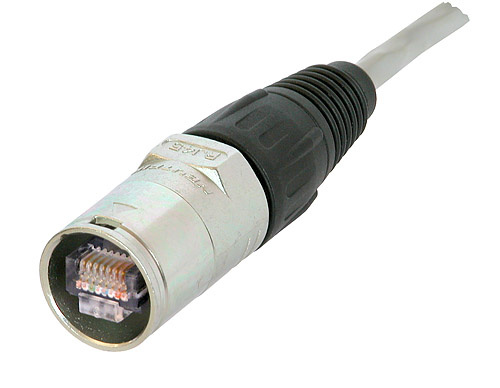 For details about the cable see: T1® Cables 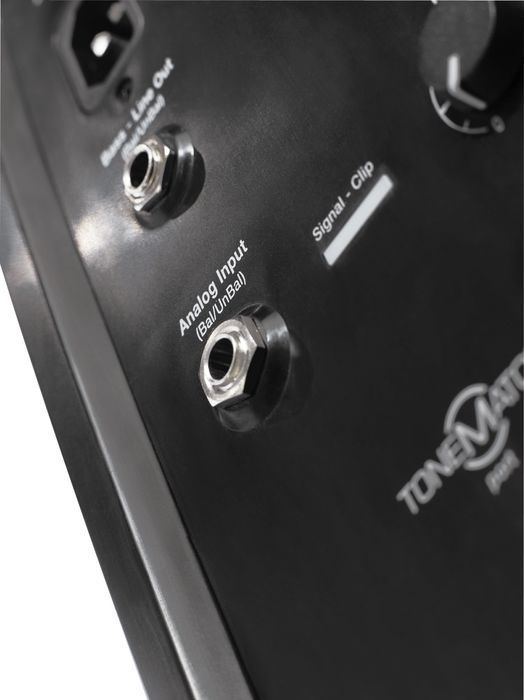 The Analog input is a ¼ inch balanced input jack.

There is a trim control for the analog input. 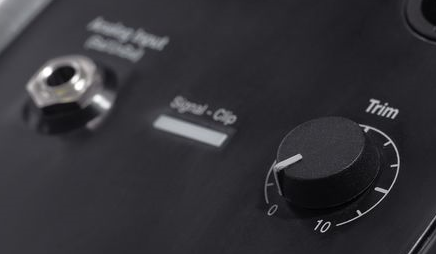 With the audio on the input signal at or near its most intense, adjust the trim level on the Model II analog input until the LED begins to turn from yellow to red. Then reduce the trim level until the signal LED is predominantly yellow with only brief changes to red.

Can a stereo signal be used with the analog input?

A ¼ inch Tip-Ring-Sleeve connector carrying a stereo signal should not be used with the analog input on the Model II.

Even though a ¼ inch Tip-Ring-Sleeve connector can carry a stereo signal this is not how this physical connection is used on the L1® Model II Power Stand.

The analog input on the Model II is balanced, and will therefore subtract the Left and Right signals on a stereo cable and you will hear an L-R (Left minus Right) signal in the Model II.

You cannot 'get through the gig' this way if you are a DJ or if you need to run prerecorded music or have stereo inputs.

If you are using a mixer instead of a T1 ToneMatch Audio Engine use the mixer to create a mono output and send that to the Model II Power Stand Analog input. 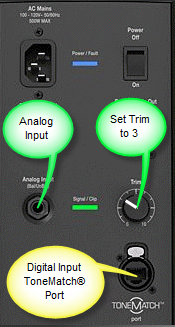 This makes it easy for two performers to connect their own T1®s to a L1® Model II Power Stand. 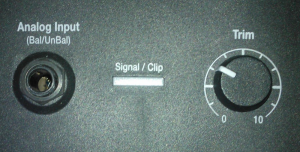 This connection is made with a standard ¼ inch jack instrument cable. This can be Tip-Sleeve or Tip-Ring-Sleeve connectors.

Set Power Stand Analog Input Trim to 3 to have approximately the same level as you would have if you had connected with the ToneMatch® connection. You may have to adjust this, but 3 is a good place to start.

Note: A T1® connected to the the Analog input will require the optional T1 ToneMatch® Audio Engine power supply.

This should work fine but a balanced connection (immediately above) is preferred especially if you will have cable runs in excess of 20 feet (6 meters) or if you hear line noise, hum or hiss.

There have been isolated incidents where Model II owners have had difficulty removing the Cylindrical Radiator® from the Power Stand.

I would encourage all users that are concerned with this happening to them to add a drop of locktite to the (2) screws identified in the attached diagram. 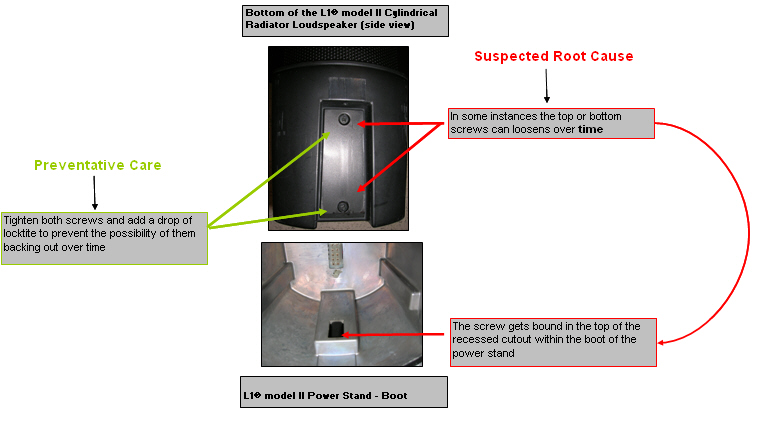 The model II takes a few seconds to fully boot up and then turn the audio on. Make sure you are waiting the right amount of time.

Secondly, if you do reset the system for some reason, be sure to wait a full two or three seconds between turning it off and turning it back on.

The fan in the Model II Power Stand comes on when the input signal level goes over a certain limit, regardless of what the internal temperature of the unit is. That way, the unit never gets too hot to where a fan needs to be on constantly.

Whatever you do, please don't cover up the fan port.[2]

Q: When I turn off the Model II there is sound like flatulence. Is this normal?

Over a year ago we implemented an improvement which allowed the system to better withstand extreme low voltage conditions caused by brown outs etc. Units produced prior to this change were quiter during the power down sequence.

Note: This noise is only present when the system is being turned off following use. For instances where this subtle noise is objectionable you may remove the Cylindrical Radiator loudspeaker and disconnect the Speakon cable of the B1 before powering down the system.

For anyone that is experiencing noise during power down we want to assure you that your system is working properly. Also, there is no reason for customers with older power stands to be concerned with upgrading as any potential issues would have surfaced by now. [3] 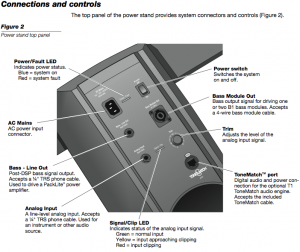 If you want to record using USB without using the L1 Cylindrical Radiator® loudspeaker or B1 Bass Module ...

You can certainly run the L1 with all, some, or none of the speakers connected. With no speakers connected it will happily serve as a big power supply for the T1. You are in no way risking damage to the unit by doing this.[4]

When Cliff invented the first L1 , we all agreed it was a stunning solution to a terrible problem. The strong consensus on this forum over several years agrees with that. Making it into a product involved countless design decisions, many of them very hard to make. But one thing was clear--the array was a solution that worked; it didn't need "fixing", compared to all the other open questions whose answers were so obscure. So we worked on the murky questions, not on the array.

Once we had the product on the market, we began to learn how it could be even better, mostly from all of you on this forum. We told you we were listening and the L1 Model II is the result of that. When articulating the array was suggested by us, we were all pretty sure it would not work well in this kind of array. It was a long shot, but we tried it anyway and it worked better than any of us expected. Another theory in the dustbin. Breakthroughs sometimes happen and this was one of them, albeit a small one. So now we bring you the L1 Model II, with all our latest knowledge.

At full chat, the L1 Model II is about as loud as the L1 Classic in front but definitely louder off to the side, due to the extra bit of spectrum wrap we got with the articulated array. Plus, we did all this with less power by the application of Real Science: a far better impedance match to the amp, a better amp, better power control processing and an improvement in the acoustical package. As a result, the new Power Stand is lighter. Sort of like the car engines from the 1930's can't touch today's lighter-weight EFI engines. The new unit is a real engineering achievement.

"Articulated" refers to the fact that the individual drivers in the Model II are angled slightly to the sides in an alternating pattern. (In the L1 classic, they're all facing straight ahead.) So both the L1 classic and Model II have extremely wide coverage (nearly 180 degrees,) but the M II gives you the most consistent tone as you move side to side.

We've all been impressed with the off-axis performance of the L1 Classic - the articulated array in the M II takes that even further.

The array has been improved to give the widest, most even sound coverage across the room that we can deliver.

Question Does the articulated array of the Model II have as long of a throw as the original L-1? I seem to recall hearing the the Classic maintained a cylindrical pattern out to around 85 or 90 feet.

Yes. The basic cylindrical wavefront properties of the L1 Model II are unchanged from the L1 Classic / L1 Model I. I have not measured or audibly noticed any difference in the speakers 'throw ability'.

Q: Can I run with only the lower section of the L1 Cylindrical Radiator® loudspeaker?

A: From a technical standpoint it is safe to operate the system with only the lower section of the L1® Model II , however the spatial and spectral performance of will be greatly reduced, so this has only a very limited application. - Hilmar-at-Bose[5]

Try inserting a ¼ inch connector in the Bass Line Out of the Power Stand. This will cause the internal logic to reduce the Bass output, and this should give you a better overall tonal balance when running with only one section of the L1® Model II.

For very detailed notes about this see Half Stack. 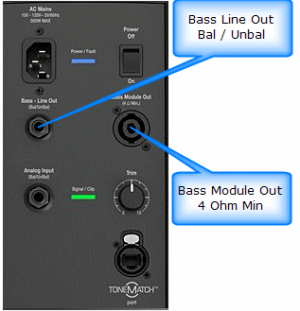 Although these numbers serve as a point of reference they do not tell the whole story. During the design of the L1 Model I and the L1 Model II the impedance of the L1 Cylindrical Radiator® loudspeaker was lowered. As a result of the lower impedance, a single 250W amplifier now powers the system to within 1.75 dB of the max SPL of the L1 Classic. Several other changes were made to the signal processing and acoustical sections to further reduce this small difference. Particular attention was paid to this change and many A/B comparisons were conducted by Bose to confirm that there was no significant audible difference between the two systems.

Compatibility with Other Members of the L1® Family of Products

Cylindrical Radiator®s are not interchangeable across models

Specifically (and without exception)

In 23 years at Bose, the L1 Model II and T1 ToneMatch Audio Engine are the most lovingly designed products I have ever had the fortune to work on. More care by more experienced people went into this than anything I've been involved in.

The most minute details were studiously created. As one tiny but important example, a propriety light pipe was designed so that the light from volume knob indicators smoothly wrapped around the knob from top to side, giving the musician a clear indication of volume from any angle. The color and intensity of the light was carefully designed so that it was visible in an extraordinarily wide range of stage lighting conditions.

Here is a picture of some members of the design team when we reached the point in May of 2006 of having the proprietary folding mechanism for the Model II power stand and industrial design for the new Articulated Array speaker finally finished. 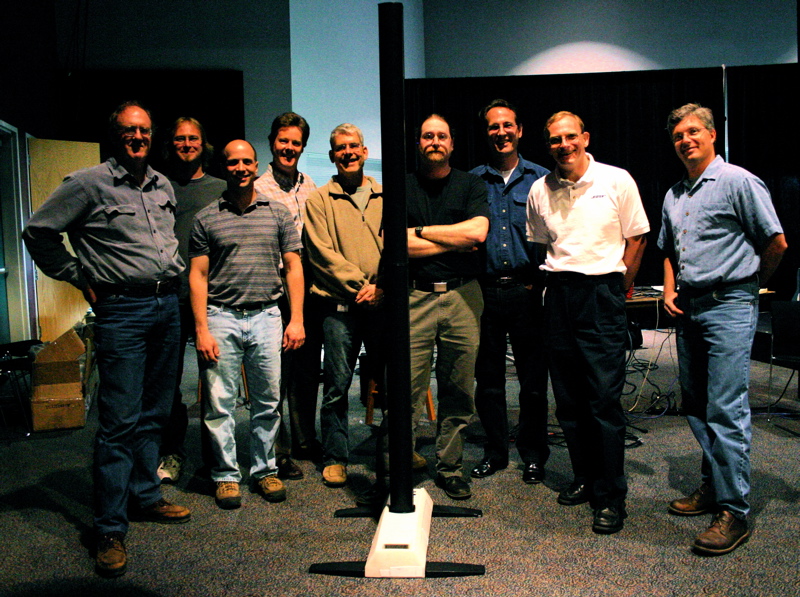 What's in the Box