Do I Need to Upgrade from the L1 Compact to the L1 Pro8? 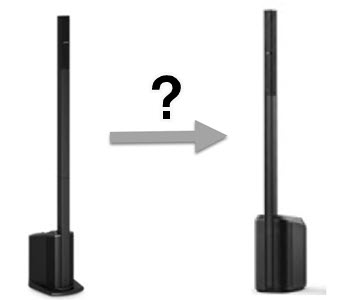 I've had an L1 Compact since Bose introduced them in 2009. and at times up to three. One of them lived in the trunk of my four-door sedan. It was small enough; I never begrudged the space. It was light enough; I never had to consider the extra gas I consumed driving it around. And it was worth it because I used it several times a week for small gigs indoors and outside. I used it as a personal monitor when playing on stages where there was a house system. It was also great peace of mind knowing I had a backup to my other gear. Although I never had to use it to replace another piece of L1 equipment, I have bailed out other people with it when their gear went down.

The L1 Compact worked well in situations where I didn't need to reach more than fifty people, and the background noise was light. The single 8-inch woofer goes down to 65 Hz, and this is fine for vocals and guitar. It was also good for pre-recorded music for backing tracks or background music. However, it wasn't great for my foot-percussion pedal, a PorchBoard Floor Bass. The fundamental frequency of the PorchBoard is 33 Hz. The Compact could reproduce the first harmonic (66 Hz), and it sounded more like a tap than a thump. It was usable but not satisfying.

There were a few things I wished for in the L1 Compact.

L1 Pro8 Ticks All the Boxes

The L1 Pro8 shares the same input panel as the L1 Pro16 and L1 Pro32. It also has Bluetooth, and the L1 Mix app. That gives me three channels. Two of them have phantom power and controls for treble, bass, and reverb. With the L1 Mix app, I can use the same ToneMatch Presets as the ToneMatch mixers (T1/T4S/T8S).

The L1 Pro8 has a ToneMatch port that supports the T4S/T8S ToneMatch® Mixers and the T1 for power.

The L1 Pro8 goes down to 45 Hz compared to 65 Hz with the L1 Compact. The 7 x 13 inch racetrack transducer is powered by a 240 watt RMS class D amp. That's nearly twice the surface area of the 8-inch woofer in the L1 Compact powered by 65 watts RMS. The L1 Pro8 gives a satisfying thump with PorchBoard Bass. It also responds better to thumps and whumps and hand percussion on an acoustic guitar. And yes, playing bass through it sounds good.

The L1 Pro8 is 6 dB louder than the L1 Compact. That will make a difference in a noisy venue.

Although I never wished to play music via Bluetooth or the ability to manage the L1 Compact with my phone or tablet - I've come to appreciate these features in the L1 Pro8.

If you are happy with the L1 Compact, you can do what you need to do, and you do not wish it could do more, then keep it. The introduction of the L1 Pro8 does not make the L1 Compact obsolete. The L1 Compact still does what it always did, just as well.