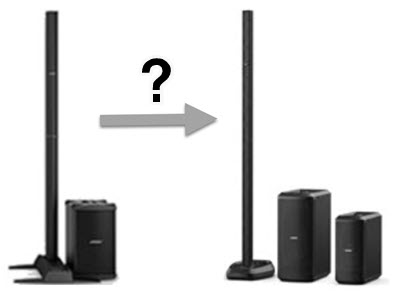 I tortured myself with this question for months between the product announcement last fall and when they were available to order in late January. Here's why I ordered the L1 Pro32 with Sub1, and what I've learned since then.

I've had an L1 Model II since Bose introduced them in 2007. I have used up to six for a large home concert venue. I've also used four outdoors for bands, and occasionally just two in a traditional Front of House setup.

The L1 Model II served me well as a solo singer/songwriter act and in bands singing and playing electric guitar. When playing electric guitar, I use a Kemper Profiling Amp for amp modelling and effects. Most of the time, I used a single B1 for the bass module, but I could scale up to two B1s or a B2, depending on the gig. When doing band gigs, I used a single B1 for me. I relied on other band members to bring whatever they needed for the gig. When doing sound for the whole band, I would bring more L1 Model IIs -typically, one per player. I might bring two F1 stacks (F1 Model 812 with F1 Subwoofer). For smaller gigs, I might set up two L1 Model IIs at the front of the stage.

The L1 Model II with a T1 ToneMatch Audio Engine was the best PA system I had ever used, and I was happy to use it exactly as Bose recommended (behind me on the stage). If the stage was tight and the venue small, I would use an L1 Compact. However, there were very few venues where the L1 Model II couldn't fit. And I preferred the sound of the L1 Model II over the L1 Compact,

I had grown used to having the T1 ToneMatch Audio Engine mounted on my microphone stand in front of me. I had everything organized around playing like that, and it all just worked.

There weren't many things I wished for in the L1 Model II.

Things I Noticed About the L1 Pro32

Since I use the L1 Pro32 with the Sub1, these comments apply.

Although I never wished to play music via Bluetooth or to manage the L1 Model II with my phone or tablet, I've come to appreciate these features in the L1 Pro32.

I didn't need the L1 Pro32. The L1 Model II has served me well, and it has aged better than I have over these fourteen years. I appreciate the lighter load and that the new system is easier to maneuver in tight spaces. I'm grateful the L1 Pro32 will fit into all the spaces I have organized for loading and storing the L1 Model II. That means I don't have to re-think or find new ways to do things.

With the pandemic restrictions still in place here, I haven't been able to test the limits of the L1 Pro32, but from what I've been able to do, it should perform at least as well as the L1 Model II. The new features were not must-haves for me, but the true test is if I'd be willing to give them up. Having spent some time with the new unit, I don't think I'd be willing to go back.