In this example a Bassist was having a problem with a resonant note (B flat).

Chuck-at-Bose provided this approach.Cite error: Invalid <ref> tag; refs with no name must have content

Set the Width control to a value that's narrow enough to zoom in on the problem area, but wide enough to easily hear the effect of coarse adjustments. A value between one third (0.33) and one half (0.50) of an octave often works well as a starting point.

Boost (turn up) the Level control a little, usually about +3 to +6 dB, so that coarse frequency adjustments (next step) can be easily heard.

Rotate the Freq control to slowly sweep across the spectrum. Start low and sweep up until you hear the offending note jump out. Go back and forth until the problem note is centered, or at its loudest. For Jim's example above, the frequency of the B flat note is approximately 58 Hz. 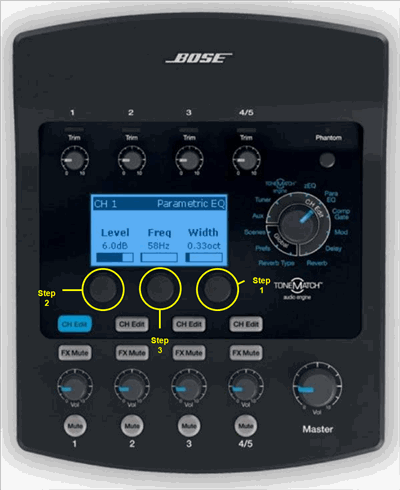 Adjust the Width control to as narrow a value as possible, so that only the problem is being affected, leaving the non-offending frequencies around it unchanged. The T1 goes down to one fifth (0.20) of an octave, which is great for 'notching out' problem notes.

Now adjust the 'Level control to cut (turn down) enough to make the problem go away, but not so much that the tone of the source is altered in an undesirable way. Values of -1 to -6 dB will often do the trick, though sometimes a more aggressive cut is necessary. Use your ears to find an appropriate balance between fixing the problem and adversely altering the tone of the source. 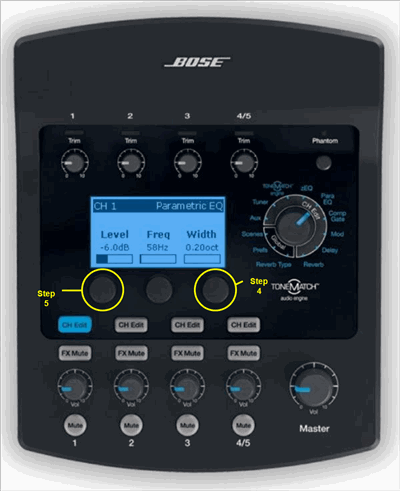