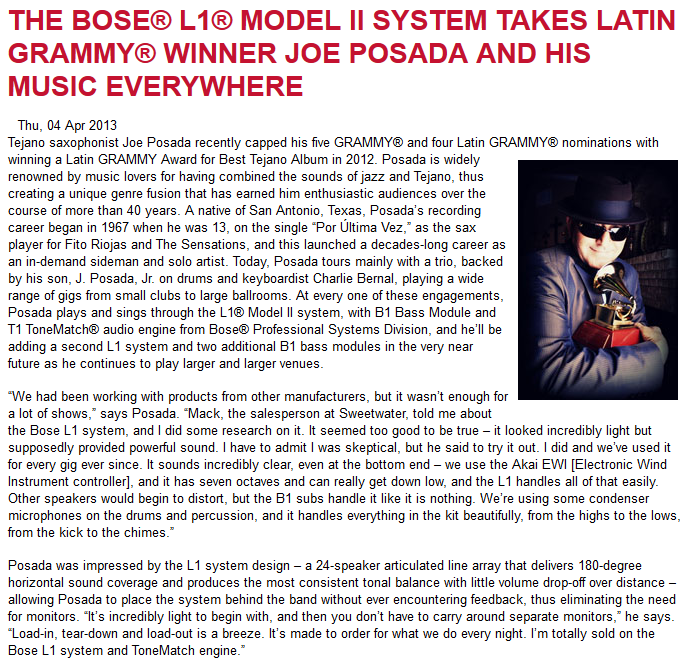 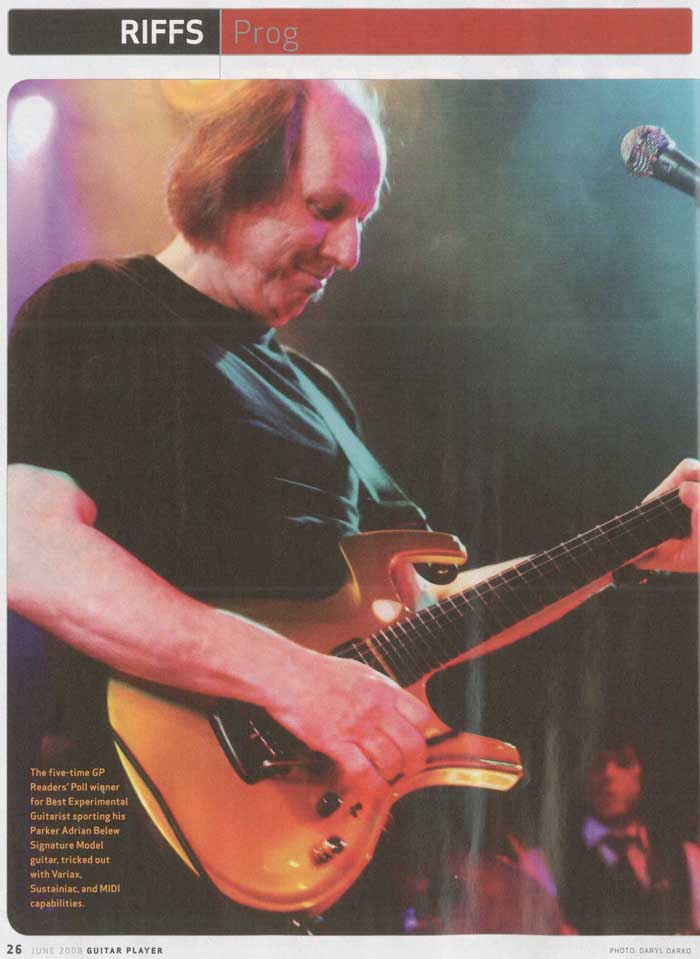 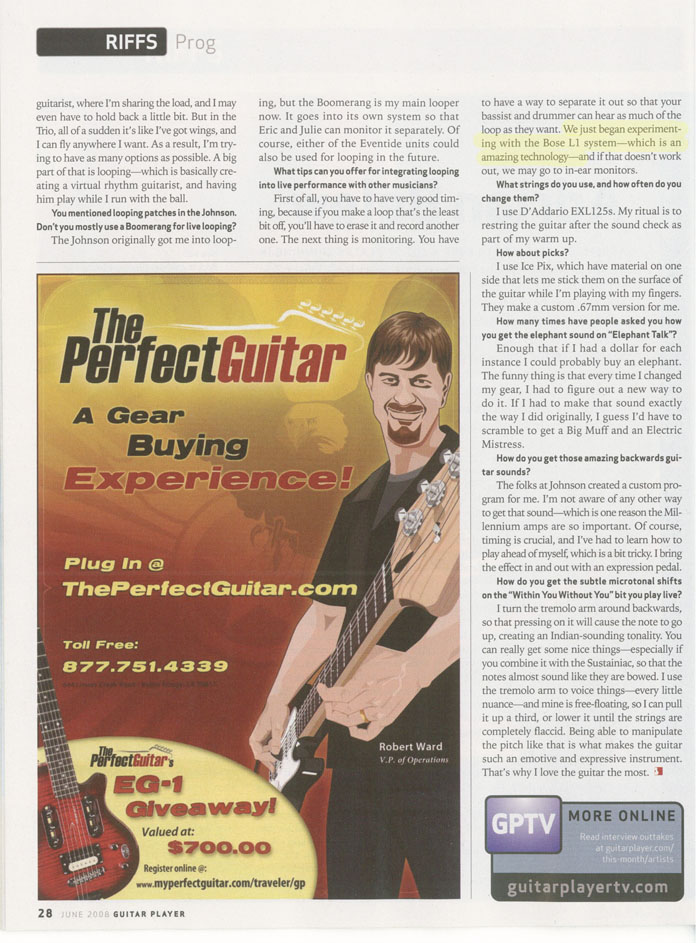 Pat Metheny on Tour with the L1® System 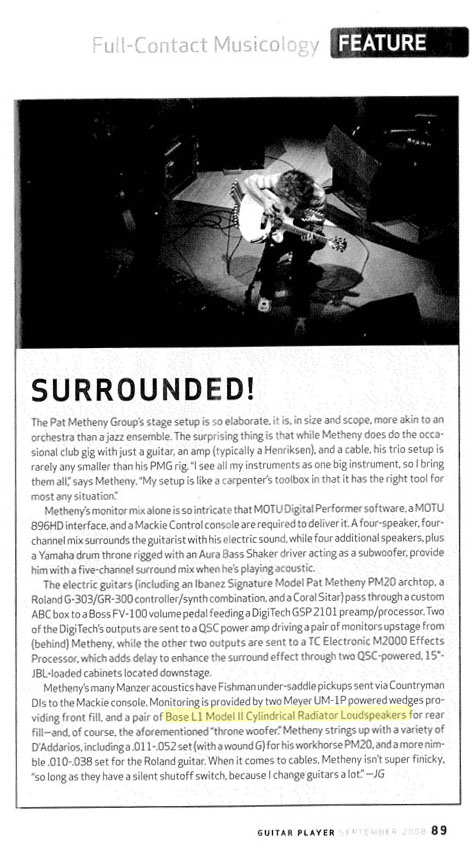 A few weeks ago, Steve Miller (no introduction needed) contacted us with an interest in our new approach to amplification. He had been researching the system on this forum. DanS (from this forum) helped answer questions, leading to the purchase of two double-bass systems. Below is the unsolicited email sent by Steve to us a few days ago talking about his first few weeks with his systems, most of which it is my understanding was spent at a well-known music camp where he serves on the faculty.

Please keep in mind that Bose does not have an artist endorsement program. Mr. Miller, like each of you, purchased and is commenting on the system with no strings attached.

I believe he may want to say more after his spectacular gig this weekend in Austin to 100,000 people as Lance Armstrong is welcomed home, time permitting.

This is posted with Steve's permission.

The two towers and four subs worked very well, I was able to unpack it and set it up and start working with it in a matter of minutes. I used them in a broad range of applications and found it to be just the ticket for clear low sound pressure music in all the different venues I performed in. We broke all the rules on some shows and followed them carefully on others. For example in one semi out door venue for two hundred people, I set up a Texas road house Blue grass group I invited to "test" the system. I set them up as follows:

I used two towers and four subs, I kept the volumes rather low and amazingly it sounded beautiful and impressed my audience and my sound man, (he does monitors for Pavarotti and is a seriously great sound man ) The musicians all walked in with out any sound check, plugged in and started playing easily, no hearing problems, they forgot all about it and did a beautiful set. During their performance I was able to walk the entire venue, inside and outside continually during the performance. The sound in the venue was warm, very acoustic, very full and I experienced the "weird" sensation of hearing a pleasant, beautifully played acoustic performance, (I could hear every instrument and voice clearly) while being un aware of any sound re enforcement. Very cool!

The audience body language was amazing, very relaxed and comfortable. We have a seventy thousand dollar tuned system in that venue that we normally use, the Bose was a very impressive alternative, it sounded great and was set up by me in a matter of minutes and left alone for the entire performance. Performance number one and I was off to a great start. Nice work you guys.

Next I played a terrible indoor venue, a loud bar with a horrible stage with a huge red wood tree running up through the ceiling, and a small cave on stage left (honestly) and a room full of glass and cement that always sounds way too loud and terrible and in that one I broke the rules again and used:

It was a hot electric blues band. Once again the audience was completely relaxed, instead of the usual shouting, and you could hear everything, everywhere. I played a few tunes with this group and it was clear we needed more towers, I could clip the system easily, I walked around the entire venue as well and I talked to a lot of people during the performance and we were all amazed. I could only suggest what it would sound like with more systems.

Next I played an out door venue for about 200 people. Joe Satriani played through my Emery amp which we miked I played acoustic guitar direct Drums and Direct electric bass. And one direct vocal mike.

This was a great set, great results happy musicians and audience

All in all I played eight shows of my fifteen performances with the towers. I was at a 17 day long music camp that has over fifty different venues and we had many different performances going on in close proximity and the response was overwhelming positive and enthusiastic from both musicians and audience and importantly the other venues and neighbors. I'm sure you are going to get orders for systems from musicians and different camps soon.

My next step is I want to try a full system as its truly designed in Seattle on August 22 at Mary Moor Park where I will be playing with the Steve Miller Band at a benefit for NOAH. I want to see if I can use the system on stage as my monitor system for the band and as front fill, and tie it in with the house system. This is a mid size venue smaller than we usually play, about 5000 will attend but it is out doors on a larger stage that is closer to what I normally work on, 60' X 40' feet. I've picked this venue because they have a great crew and we can fool around with it in the afternoon with out causing too much pre show stress, if it works I'll use it that night for the show.

I'm very impressed with what you guys have designed and want to see if it will work for my band on a large out door shed stage as a monitor system. After developing in ear monitors for the last 14 years I think this should work much better from a playing stand point.

Thanks for all your hard work. I am very impressed with the thought process that has gone into making this system work so smartly and simply and the R & D you guys have done is greatly appreciated and beautifully thought out. After setting it up, playing in a lot of different venues with different musicians and tearing it down and physically carrying it around for 17 days on my musical vacation I am convinced this is a great system and I haven't even heard it used as its designed to be used yet. Please pass my thanks to your entire team for doing such a great job, they deserve it!