I've owned my own system for 2 months and here’s my possible solution to some of the small problems I found when it's used with a disco.

My initial findings that the PS1 Power Stand (Classic) / Model I (the PS1) footprint was larger than expected were put into perspective when it was pointed out to me that it was smaller than a speaker stand and certainly no bigger than a bass bin. This is true, however when the B1 Bass Modules (the B1s) are added the system does need more floor space. One problem I did find was at venues with limited space for the disco when I ended up placing the B1s behind my star cloth which I didn’t think was an ideal solution.

Another solution I tried when space was tight was to place the B1s straight on top of the PS1 and secure with Velcro through the handles. This worked but I thought that the vibrations going into the PS1 wouldn’t do it any good in the long term.

True the L1 was originally designed for bands/singers and would be located behind them. When the system is placed in the normal disco position other potential problems are evident:

So onto my latest idea which was to make a lightweight frame for the B1s to sit on - again my plan is to only use this when I don’t have enough space to spread things out.

The photos below show the unit after construction, before I coated it black, so that it’s easier to see (except for the last one). It took just under half an hour to make and weighs only a few hundred grams. Details follow the pictures. 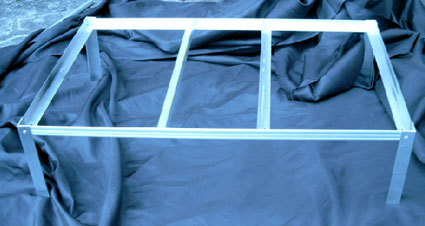 In position over the PS1 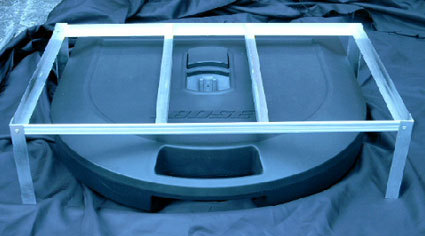 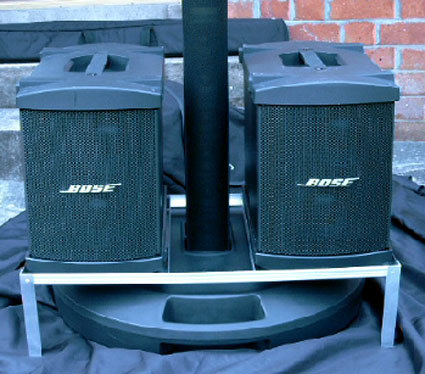 The rear control panel 'protected' by the B1s 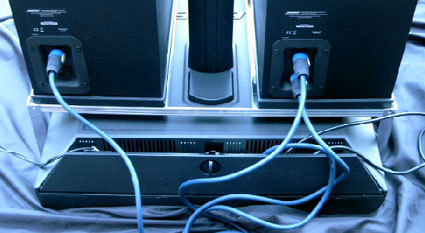 The stand finished in 'Disco Black' 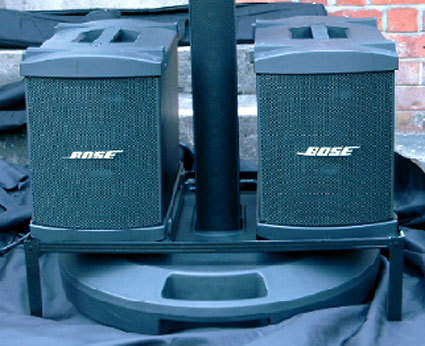 Details and Answers to Questions

To answer the questions that have already been asked:

I've only used this in locations where the system wasn't even at half power due to the size of the venue so the effect on the sound wasn't even noticable.

The stand is made from 25mm right angled aluminium

My apologies if you require this in feet & inches but my new tape measure only had the metric markings on it.

I fixed mine together using rivets (3 at each corner and 2 for each middle cross member) - now after making it I did think that if I omitted one rivet from each leg they could then be folded flat to make it even easier to transport.

Again this was only in small venues where there wasn't room to spread the B1s out and where the PS1 could be vulnerable. I was pleased with the way they stood up to the task - even when a videoographer choose to put his foot on a (raised) B1 to steady himself whilst he filmed - until he saw my glare. Something that I read on another thread and indeed I've experienced myself, is a tendancy for the B1s to wander on a wooden floor when the bass is pumping. Because the stand is fairly tight fitting to the PS1 this doesn't happen.

One last thing - the finish is simply Gaffa (Duck) tape

Acoustically there shouldn't be any problems or any significant difference two stacking two B1's on the side. As a rule of thumb, as long as the acoustic centers (and the follow) are closer as a quarter wave length at the highest frequency of interest, the exact location doesn't make much difference. For the B1 that comes out to 16" or thereabouts so your ingenious setup should work great.

To take the questions in detail:

As pointed out above that will not result in a significant difference.

B1s not on the floor

In the extreme case, that would lose 6 dB, which is a fairly sizeable difference. "Extreme" in this case means that the B1s are somehow suspended in free air with no reflecting surface nearby, but that's a fairly unrealistic scenario. Lifting the B1 by a few inches doesn't really make much of a difference.

However, wall-loading does make a difference. We assume that the "normal" case is on the floor (within a few inches) and relatively close to one wall (within a couple of feet), either a side wall or a rear wall. If you are far away from any wall, you will have to turn up the bass a little and if you are in a corner you may have to turn it down somewhat.

Moving the B1s into a corner will gain you up to 6 dB more bass.

Not stacking the B1s on top of each other?

Again, no problems as long as they are not too far apart (16" or less).

Please be aware that the 16" is not some magical hard number. If the B1's are further apart you may experience some power loss or interference at a few spots in the audience, but nothing drastic. Only at about 6 feet or up you'll find that the overall radiate power has dropped by 3 dB, which is certainly noticebale but not a dramatic change either.