These are notes from a report at the Sisters Folk Festival in 2006 where Dan Sayan & I ran sound on several stages. One of the stages we experimented with mic'ing a bluegrass band in the method that others have used with good results on the Bose forum. 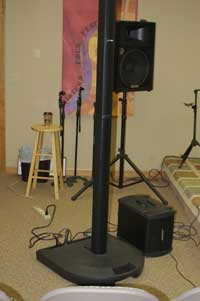 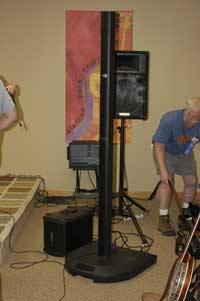 The bluegrass band (The Anvil Blasters) had traditional instrumentation & they wanted to try two Studio Projects C1 condenser mics in an X/Y pattern like the Rich Stillman IBMA setup & 2 L1 x 1 B1 systems. The upright bass had a bridge pickup which we plugged into channel 2 of the stage left system with preset 60, & the dobro wanted to try running direct into channel 2 of the stage right system with preset 40 I believe (Dan had good luck with that preset previously on the dobro).

We ran the condensers into channel 1 on their respective side with a 00 preset. After a little 100 hertz or so feedback in the beginning which was fixed with some bass rolloff, the sound was fine & clear. The 4 main performers (mando, banjo, guitar, & dobro) were accustomed to hovering around their respective mics on each side of the stage with a 3' spread which caused too much left-right imaging, so we moved the mics to about 2½' & had them try to work the middle more. 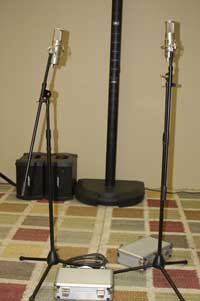 The band had good luck in the past with the mics at different heights (owing to the fact that the guitarist is about 6'3" on stage left & the mando player is 5'2" on stage right) with the mics facing slightly down to pick up instruments on their standard system. We tried that at first, but found that the mics at the same height & facing parallel with the ground gave a better mix.

The systems were both canted in & the mics as well. This gave a very nice sound at a pretty good level in the medium-size room.

The band could hear fairly well on the back side, although canting the systems in more didn't seem to help much. I think straight on would have produced the best back-side monitoring. Overall they were very pleased & I was amazed that a less expensive large-diaphragm mic sounded so good with little feedback.