Can I Use It as a PA

The short answer is yes! This question comes up frequently in various forms in the discussion here. While Bose recommends one system per performer, this doesn't mean that the system can't be run as a conventional PA. I've done it on the road to getting to the ideal, and while having more systems is better you can get great sound running several inputs into a mixer into a Bose system.

One L1 with a Mixer

Two L1 s with a Mixer

The next three sketches address this. 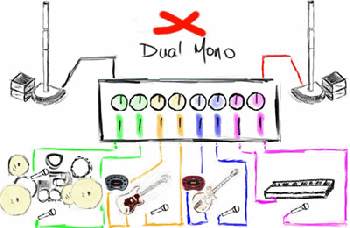 Quoting Cliff-at-Bose This particular setup is deeply ingrained in the amplified music culture as the Way We All Do Things, i.e., a PA is always set up on either side of the artists{s}, always has been. That's how we do it. Actually, this approach works better with a typical FOH system as everyone in the audience is much more aware of the system they are closer to (it's louder), due to the ubiquitous inverse-square law of sound radiation (loud up close, quiet far away). And, of course, the problems associated with this approach are discussed in endless detail throughout this forum (bleeding ears, disconnected sight/sound of the performance, nobody onstage knows how they sound in the audience, etc).

Our system has such a gradual change in sound pressure with distance that a pair of systems are clearly and more equally heard way off-axis. This is the quality that gives a pair of L1's such a wide stereo image "sweet spot". It's also a quality that leads to bad dual-mono. In a dual-mono setup where, say, the vocal is center-panned, if you are off-axis, you might hear both systems equally in level, but they will arrive at your ears at different times, corresponding to the difference in distances between the straight-line paths of the two L1's. At a half-wavelength path difference, you will get a complete cancellation where you are listening and above this frequency, you will get, alternatively, reinforcement, then cancellation and so on as frequency goes higher. You will also get a horizontal polar pattern that starts to look like one of those cartoon-character gloves. These are called "lobes" or "fingering" and the higher you go in frequency, more lobes (or fingers) will show up. And so, as you walk in an arc around the pair, you will hear sound get loud, soft, loud, soft and so on. In contrast, a single L1 has an almost perfect, arc-like polar pattern throughout most of its range.

As an example, if the path difference between L1's is a foot where you are standing, you will start the lobey behaviour at the half-wave of a 2 foot wavelength frequency, or ~500 Hz. Way way above this frequency (like 5000 Hz, or upper midrange), the lobes and interference cancellations are so dense that it almost sounds like music. This behaviour sets up two very unpleasant qualities that are easy to hear. One is that off-axis, sound will get duller and more indistinct (blurry or vague) the more you move in this direction. Right up the middle it's fine, where the path differences are negligible. The other thing this sets up is an unpredictable feedback-producing sound field due to all the lobes. Depending on where your microphone is, you might have a lot of feedback at some frequencies and none at others. If you move only a little bit, you'll get feedback and no-feedback at a totally different frequencies. All in all, a dual-mono system might give you a little more level, but not everywhere. It isn't pretty.

This is why one system always sounds better everywhere than two. And so two independent systems is best for two separate performers. Because they are not related ("incoherent" or harmonically unrelated), they can't interfere with each other and you hear the separation and individual localization everywhere. Interestingly, the idea to use a microphone and pickup, both on the same instrument (guitar), might be good. They will be harmonically related in some way. I never heard of this being done but it would be worth a try in wide stereo. Might be Monster, might be Munster. Go try. 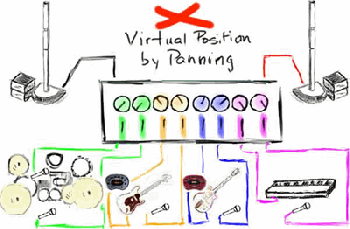 I thought I was being clever by trying to position everyone in the mix using the pan pots. Notice the indicators on the mixer.

Dual mono means the same signal coming out of two sources, so anything panned up the middle is dual mono. Good for the audience up the middle, "not that great" for those off-axis. Unfortunately, our system is worse at this than an inverse-square-law system. Better to pan hard left and right. Make sense?

When I pressed the point about virtual positioning...

Virtual placement will vary all over the audience. Again, great up the middle, gets worse as you get more off axis. You should try all this yourself with some simple recordings (like solo voice, solo guitar, etc) off a multitrack and walk around the room. This will not show up big in a small room (like in a studio control room). But in a place you might play it will.

Don't take my word for this. Go do it and then you can speak with a True Knowledge, only gained by being there, doing that.