L1 is often used to refer to one system including the L1 Cylindrical Radiator® loudspeaker, Power Stand, and one or more B1 Bass Modules. "PAS" has never been used by Bose out of respect for another company's trademark.

2007 -     : The L1 Model I is the new version of the L1 Classic. It is RoHS compliant for release in Europe but functionally basically the same.

Distinguishing features include orange labels on the back of the power stand and on the line arrays. Also many of the accessory connectors have been removed on the back panel. See L1® Model I

2007 -     : Lighter, smaller Power Stand with folding legs, uses an articulated array in the Cylindrical Radiator. This uses the T1 as its recommended user interface and connection point for all inputs. At least one B1 Bass Module is required for proper operation. See L1® Model II

2007 -     : This is a the user interface and input panel for the L1® Model II with inputs for microphones (up to three) and line level inputs (up to two more). It is compatible with the L1® Classic and L1® Model I as well. See T1 ToneMatch™ Audio Engine.

A1 (PackLite® power amplifier Model A1)

2003 -     : These supply the bass frequencies for the L1 . Up to two of these may be attached to the Power Stands of any model except the L1 Compact. These are often referred to as "subs".

2012 -     : These supply the bass frequencies for the L1 . One of these may be attached to the Power Stands of any model except the L1 Compact. These are often referred to as "subs".

This refers to the actual loudspeaker that plugs into the L1 Power Stand. This breaks down into two pieces for transport, but when assembled, functions as a single unit. See: L1 Cylindrical Radiator® loudspeaker

What is the concept behind ToneMatch® presets, and what are the benefits?

ToneMatch® is a proprietary new technology from Bose that for the first time makes it possible for live musicians anywhere, anytime, to play with recording-studio tonal quality.

Most musicians, performers, and entertainers go to enormous lengths to develop their own, unique sound, or tone.

But one of the biggest sources of frustration in finding and then keeping good tone comes from the need to use an instrument pickup or microphone, and a loudspeaker.

The problem is that they all sound different.

They all color the sound of the voice or instrument that’s being amplified.

When musicians hear this coloration, they have a choice: live with the tonal coloration, try to fix it, either themselves or probably better by trying to work with a good sound engineer, or try another microphone or pickup.

Exactly the same thing is true of loudspeakers.

They all sound different.

Again, when musicians hear these tonal changes, they can either live with them, try to fix them, or they can look for another loudspeaker that they like better.

Bose concluded that most musicians are either playing with undesirable tonal coloration from microphones, pickups, and speakers, or are spending a lot of their time and effort trying to fix it.

Now, one way you could get rid of the tonal coloration would be to give each musician a good sound engineer, who could listen to the tonal changes and take the time necessary to make adjustments on the sophisticated equipment needed to do this kind of work.

With ToneMatch technology that work has already been done.

Building the Studio Engineer into the Equipment

Bose has been working with many musicians and have listened to a wide variety of instruments, microphones and pickups connected to the L1 system, and for each, has taken the time necessary to make the adjustments to the sophisticated equipment necessary to optimize the tone.

Then, they stored the settings inside the T1, ready to be recalled at the touch of a button by any musician, anywhere in the world.

In order to provide the largest library of ToneMatch® presets, Bose has been working with a growing number of manufacturers to develop these studio-quality settings for their microphones and instruments.

You can watch video interviews with people from those manufacturers talking about ToneMatch technology.

How the Loudspeaker Affects ToneMatch Performance

It should be stressed that the loudspeaker plays a crucial role in delivering this kind of tonal improvement.

The L1 system is unique because it delivers the improvement consistently across the stage and throughout the audience in a way no conventional speaker can.

You might not want to change anything once you hear the improvement provided by a ToneMatch® preset.

But if you do, there’s another key new technology built into the T1 ToneMatch Audio Engine for doing just that.

First, you select you ToneMatch preset.

Then, you turn the rotary selector on the T1 to zEQ.

At this point, three controls on the T1 are automatically programmed to provide tonal enhancements for your voice or instrument.

It is the combination of the new tone-shaping technologies in the T1 engine, married to the exceptional coverage and high degree of portability in the new L1 model II system, that compels Bose to say that this is the most advanced system they’ve ever offered to musicians.

These acronyms appear in discussions on the Bose® Pro Portable PA Community. Most have a wide application in the live music environment, and some are peculiar to the discussions among L1® owners.

A DI unit or DI box is an electronic device designed for connecting a piece of equipment with an electronic audio output to a standard microphone or line level input. For more details see: DI

Disk Jockey, but may also include KJ (Karaoke Jockey), VJ (Video Jockey). There is a dedicated application page for DJs. 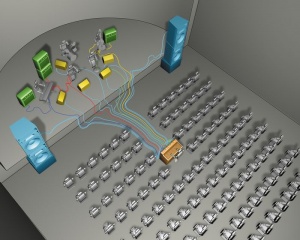 Front of House System (blue) and FOH Engineer in the Audience

FOH may also mean the Front of House Engineer. This is the person that controls the mix for the audience. Sometimes FOH means the position in the house where the FOH Engineer operates his/equipment.

The term most often used in measuring the magnitude of sound. It is a relative quantity in that it is the ratio between the actual SOUND PRESSURE and a fixed reference pressure. This reference pressure is usually that of the THRESHOLD OF HEARING which has been internationally agreed upon as having the value .0002 dynes/cm2.

¼ inch jack with Tip-Ring-Sleeve connections. See #2 in picture and click picture for details.

See TRS and Balanced vs Unbalanced

¼ inch jack with Tip-Sleeve connections. See #1 in picture and click picture for details.

See related:TRS and Balanced vs Unbalanced

Terminology & Concepts is an article that has detailed explanations of some of the terminology that is used here in Bose® L1® Wiki and the Bose® Pro Portable PA Community.