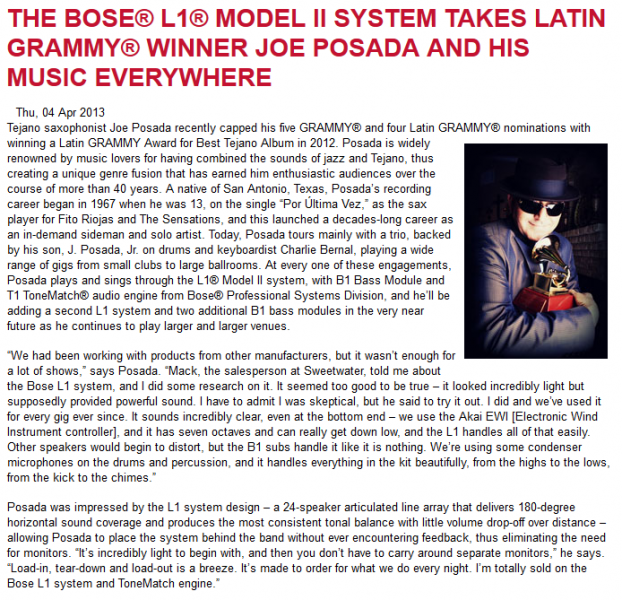 Thu, 04 Apr 2013 Tejano saxophonist Joe Posada recently capped his five GRAMMY® and four Latin GRAMMY® nominations with winning a Latin GRAMMY Award for Best Tejano Album in 2012. Posada is widely renowned by music lovers for having combined the sounds of jazz and Tejano, thus creating a unique genre fusion that has earned him enthusiastic audiences over the course of more than 40 years. A native of San Antonio, Texas, Posada’s recording career began in 1967 when he was 13, on the single “Por Última Vez,” as the sax player for Fito Riojas and The Sensations, and this launched a decades-long career as an in-demand sideman and solo artist. Today, Posada tours mainly with a trio, backed by his son, J. Posada, Jr. on drums and keyboardist Charlie Bernal, playing a wide range of gigs from small clubs to large ballrooms. At every one of these engagements, Posada plays and sings through the L1® Model II system, with B1 Bass Module and T1 ToneMatch® audio engine from Bose® Professional Systems Division, and he’ll be adding a second L1 system and two additional B1 bass modules in the very near future as he continues to play larger and larger venues.

“We had been working with products from other manufacturers, but it wasn’t enough for a lot of shows,” says Posada. “Mack, the salesperson at Sweetwater, told me about the Bose L1 system, and I did some research on it. It seemed too good to be true – it looked incredibly light but supposedly provided powerful sound. I have to admit I was skeptical, but he said to try it out. I did and we’ve used it for every gig ever since. It sounds incredibly clear, even at the bottom end – we use the Akai EWI [Electronic Wind Instrument controller], and it has seven octaves and can really get down low, and the L1 handles all of that easily. Other speakers would begin to distort, but the B1 subs handle it like it is nothing. We’re using some condenser microphones on the drums and percussion, and it handles everything in the kit beautifully, from the highs to the lows, from the kick to the chimes.”

Posada was impressed by the L1 system design – a 24-speaker articulated line array that delivers 180-degree horizontal sound coverage and produces the most consistent tonal balance with little volume drop-off over distance – allowing Posada to place the system behind the band without ever encountering feedback, thus eliminating the need for monitors. “It’s incredibly light to begin with, and then you don’t have to carry around separate monitors,” he says. “Load-in, tear-down and load-out is a breeze. It’s made to order for what we do every night. I’m totally sold on the Bose L1 system and ToneMatch engine.”

Click on a date/time to view the file as it appeared at that time.

The following 3 pages link to this file: