What is a Forum Guitar? 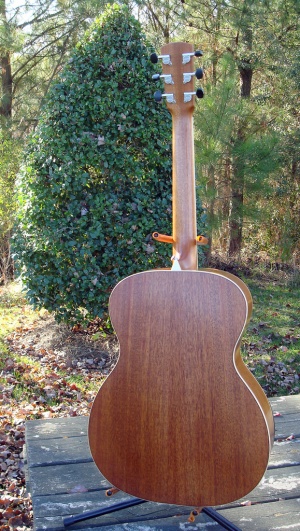 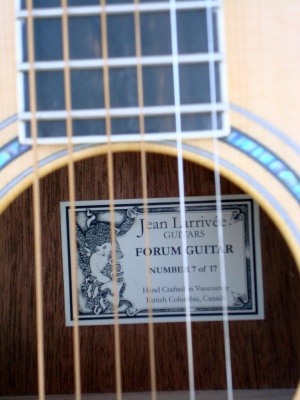 Jason at Notable Guitars worked extensively with the Larrivée Forum to select what would become the forum guitar.

There were 17 Forum guitars delivered in early January 2005. One of the Forum I guitars was damaged and a replacement was shipped with the 9 Forum II's that were shipped in April 2005 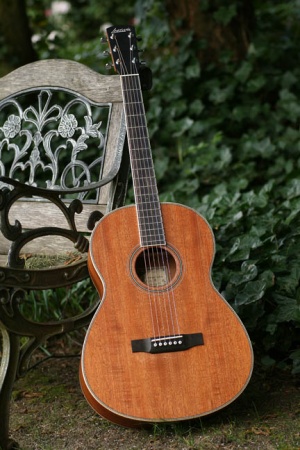 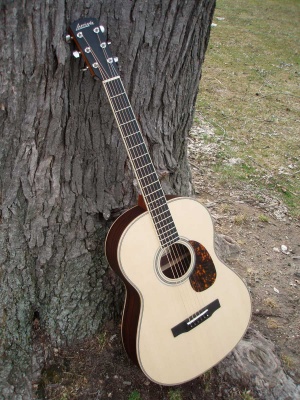 The Forum III Guitar started shipping March 16, 2009. There was a factory tour of the Vancouver, BC plant where these were built.

Orphaned Larris What If...

(i.e. OOs, OMVs) as in out-of-production models...
What if enough Forum-ites commission Mr. Jean Claude Larrivee himself & his sons to produce... a Special Order batch for a discontinued model...
say through 12th Fret, Guitar Adoptions, Notable, Trinity... as distributors - that just about covers the continent and both sides of the border.

Please keep your comments brief - (1) specify Larri-MODEL ONLY you wish to order.... (2) Yes or No - do you think this is possible?

(IMHO - I think this is possible or at least worth trying... given enough number of us who are loyal Larri-fanatics)

SERIOUSLY... I guess this is a survey / vote ===> so we can have our dream most cherished Larri to own... or you can tell me if I'm on GAS-delusion?

YUP. Jim is going to get us the information on pricing and timing. But we are going to be able to order some 00-03 MT's.

Please don't ask for other options. This is all Larrivee will make this time.

So if we keep it simple as has been discussed in the 00-03 thread then we can get this done easily and quickly.

So who will be in for sure? I know of 3 already including myself that are ready, but I'll let y'all say so.

Forum V Specs Vote - October 24, 2011
This is a great discussion to visit to get a sense of the latest news about the Forum V guitar.

Friends I am pleased to announce a Dealer has been secured:
LA Guitar Sales has agreed to take this adventure to the next level.

Some members are very aware of Ted at LA Guitars and his vast experience in doing custom orders.
As a result of THIS TOPIC we have reached this point.
In order for this adventure to become reality we need 10 commited members at this point we have 6 with a few on the fence.
Please be patient in regards to downpayment required and timelines they will come to light as the dealer gets up to speed and connects with Larrivee.
I or LAGuitars will post the detail options of the spec as I know them before Friday most of the things we have been discussing will be addressed. Some options have flexibility others are one or the other, still others I need clarity on.

Hope this meets your approval to date. Friends this is an exciting time for us all and quite an opportunity of which I feel privledged to partake. Anyone considering a Larrivee electric - there could not be a better opportunity.

As many of you know, there is a new Forum guitar in the works. The Forum V is set to be the first forum electric, and is based on the RS-4. One of the design elements to be included is the very first Larrivee Mini Humbuckers in the neck position of the guitar. The process of creating a new pickup is arduous; particularly when you have all of the parts made from scratch – domestically. I thought it would be interesting to document the process of how these pickups come to life from the very beginning of the design process, right through to the first production models.

This will be an evolving thread that will take several months to complete, but hopefully will give people a greater appreciation for what goes into these instruments and an insight into the thought process that goes into the design.

So with that said, let’s start the story with some background:

Mini Humbuckers have been around in one form or another since about 1959-1960. The first versions appeared on Gibson-made Epiphones in 1960. Over the next 12 years at least five distinct variations of the pickup were created; The Original PAF Mini, Offset Pole Mini, Original Firebird Mini, Johnny Smith Floating, and a “sidewinder” mini designed by Bill Lawrence around 1972. All of these pickups were built around the same pickup cover, but inside were completely different designs – and ultimately produced very different tones.

The Original PAF Mini was designed by Seth Lover in approximately late 1959. The pickup was to be used on the “lower-end” versions of Gibson being marketing under the Epiphone Brand (acquired by the parent company of Gibson in 1957). The pickup was a smaller more compact version of the Seth’s original Humbucker design (The PAF everyone knows and loves). It featured two bobbins mounted side-by-side; each bobbin containing a low carbon steel pole and a single magnet at the bottom of the pickup. The bobbin on the south side of the magnet used 3/4" long #5-40 headless slot head screws made from free machining steel, while the bobbin connected to the north side of the magnet contained a steel blade made from 1018 low carbon steel – The base plate was constructed from 0.032” thick 18% half hard nickel silver and the cover was 0.025” thick nickel silver usually plated in nickel. The bar magnet used was Alnico 5, similar to what was in its full size PAF counterpart.

The wire used was 42 gauge plain enamel – likely the exact same as used on full size PAF’s. This wire was notoriously non-uniform with large diameter differences from spool to spool. The two bobbins are smaller and could not hold quite as much wire as their full-size counterparts. A standard Humbucker bobbin from the era could have anywhere from 4000-6000 turns of wire, while bobbins on the mini would only hold between 4000-4500 turns of wire. Fewer turns of wire mean that the pickup had a slightly lower DC resistance than its full size counterpart – Minis would commonly range from 6.4-7.3 kOhm while full size PAF’s from the era would average from 6.9-8.0 kOhm. No direct record was kept, but from evidence within the pickup itself, it appears to have been wound using an old gear driven Geo Stevens 38AM coil winder – probably the same coil winder that was used on P-90’s if the era.

Tone wise they were “similar” to a PAF in tone, similar output level, with a hint more high end.

Around 1962, Seth Lover made some changes to the Epiphone mini Humbucker. He changed the design to offset the screws in the pickup. Each coil of the pickup would now have three screws and a blade. The reason for the change in unknown, but Seth did feel that the 3 x 3 design had some improvements over his original Humbucker design. He felt that “It wasn’t quite as loud as the Gibson version, with fewer turns of the coil, and it was a bit trebly. But it did the job.”

The blades were wrapped in 1 turn of Scotch #4 black paper tape to reduce vibration of the slug against the cover, and to hold the slug in the bobbin. Other changes to the pickups followed (which were not intentional design changes, but rather pragmatic business decisions from production / management). The magnets were now being supplied by a new vendor and were polished as opposed to rough cast – making them more uniform. Like the full size Humbucker counterpart, in 1963 the wire was changed from plain enamel coated to poly wire. The plain enamel wire had a purplish hue to it, while the poly coated was clear or slightly red. In addition, in 1963 the “Patent Applied For” sticker was replaced with a sticker that acknowledged the granting of the patent. The sticker now read “Patent No 2,737,842” – Which strangely enough is NOT the patent number that was issued to Gibson for the Humbucker! It is actually a patent number for a wrap around bridge. It is suspected this was done to make it harder for copy cats to lookup the design details of the pickup which are listed in the actual patent – Sneaky! For reference the actual patent number is 2896491.

The early 1960’s were not kind to Gibson – They were quickly losing market share to Fender guitars who’s instruments were seen as modern and more affordable. In an attempt to regain footing in the market, Gibson introduced the radical “Firebird” model in 1963. This line of guitars featured a totally different mini Humbucker that was substantially more “Fender-ish”.

During the 1950’s and 1960’s there were two primary different schools of thought on pickup construction. On one hand you had Fender who had the magnet directly in the middle of the coil of wire, and on the other hand you had Gibson who used a steel pole in the middle of the coil of wire with the magnet mounted beneath. The ultimate difference being that on a fender the strings were mounted right above the actual magnet, while in the Gibson there was magnetized steel directly under the strings. Each method produced completely different results; the Fender pickup was bright and twangy with bite (Think Telecaster) while the Gibson style was fatter with smoother.

The Firebird mini still used the exact same bobbins – except that the steel cores that were normally found in the bobbins were replaced by magnets! By removing the steel poles from the pickup and replacing them directly with magnets the sound of the pickup dramatically changed. The magnets were now directly in the core of the coil very similar to the fender pickups – This gave the Firebird Mini a more “Fender-y” sound – A brighter, snappy Humbucker with twang to it. Because of this, it is a popular option on many Tele style guitars as it can have some twang, but still buck the hum.

Since the pole screws on the cover were gone, the nickel silver cover was flat and clean without any holes. The earliest versions of the pickup (1963) had plain enamel wire, but pretty much immediately switched to Poly wire.

After a falling out Guild in the latter half of the 1950’s, guitarist Johnny Smith was approached by Gibson Guitars in 1960-1961. Gibson developed a new signature model called the “Gibson Johnny Smith” which featured a rather unique mini Humbucker.

Aside from the fact that the pickup mounted to end of the fretboard, what made it unique was that it was really the first mini to start moving towards the Fender construction style. However, unlike the firebird pickup, there was only one magnet. The magnet was located in the “Slug” Coil, and was connected to the “screw” coil by a steel plate which transfer the magnetic field to the screws What’s special about this pickup is that it is sort of a gateway pickup – It’s halfway between a fender style and a Gibson style. The magnet directly under the strings on the slug coil creates a distinct attack and clarity, while the screw coil retains the long envelope of traditional Gibson Humbuckers.

The last design is one that I will just briefly touch on. Bill Lawrence is a very famous pickup designer, and has many unique patents to his name. Throughout his career, it’s fairly evident that he likes two specific things – Ceramic Magnets, and Side Winder pickups. A sidewinder is a pickup where the two coils do not face upwards, but are rather placed on their sides. A magnet is still placed in the middle of each coil, but the magnet connects to a steel pole of some form in the center of the pickup.

There are many pickup makers, and players that really like side winder pickups – but it’s a design that I’m not crazy about in this pickup, so I’m not going to devote any more time to it. I mention it for historical sake only.