There are already some recording results done by Clifford Henricksen. He made some live recordings of his band (The Cliff Henricksen Band). Check them out Just a Heartbeat Away. He recorded his band with two microphones, and the result was great. But I wanted to record in another way. My goal was to find out what kind of results you get from using the auxiliary outputs of the T1 ToneMatch Audio Engine Auxiliary out.

We had 4 L1 Model IIs hooked up to 4 T1 ToneMatch Audio Engines.

Next I enabled the T1® auxiliary output. For the vocal (channel I) put it on 75%. 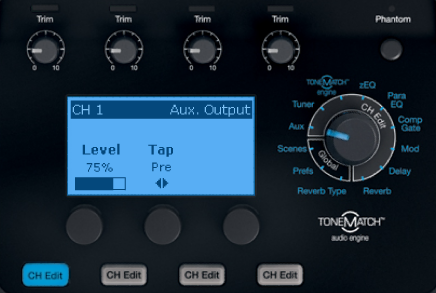 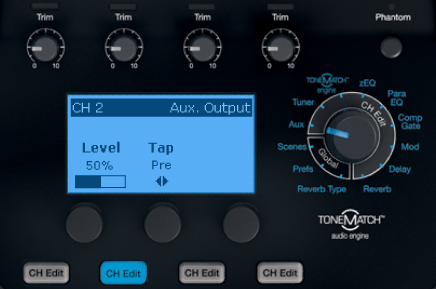 This gave a reasonable mix between the instruments and the vocals.

The four outputs were hooked up to a Mackie Mixer and I mixed the 4 sources to the stereo output with the help of a Headphone (Bose QC2) and a computer to record.

The recording program was Audacity, and the recordings were made over a 4 days period.

Some of the recordings (Gibson’s) we gave a second Studio Treatment (Compressing and Enhancing). Most of the others are not treated. Although the fact that these recordings are made on the fair with all of the ambient noise (a lot!), you can hardly hear it. On the other side, I’m missing the real live feeling. I think a combination of recording between two ambient mic’s and the auxiliary output will do the trick in the future.

I think that these recordings give an idea of what one could do with a multi-track recorder and two extra ambient mikes. Hopefully I will be able to make such a recording next time and share it with you.

Comments on the recordings: