These are tips for living with the R1 Remote Control Unit

Will the unit still work without the R1 Remote?[1]

Even without the R1 Remote control the system can get to full output if the input trims are carefully set.

-- Hilmar talks about full power the discussion board

What do the LEDs mean?

The LEDs indicate that a certain level of signal has been reached at a point after the preamp and after the insert loop and before the conversion of the signal from analog to digital.

The LEDs are independent of the Master Volume Control at the bottom of the R1.

The LEDs turn from off → green when there's more than a little bit of signal in the channel.

The LEDs turn from green → red when the signal reaches a threshold that is about 10 dB below the level that would clip the A/D converter and cause objectionable distortion.

If the LED is only flickering red the signal is in a safe range and there will be no distortion.

If the LED is red most of the time the signal is too high and this is what you do.

2) Check the LED on the remote. If it is still red most of the time, turn the Channel Volume Control for that channel down on the R1 remote until LED is only flickering red.

After completing this procedure you may be able to get more overall volume by turning up the Master Volume Control on the R1.

Hint: Many players find it helpful to note their gain settings -- trim on the PS1, channel volume and master volume on the R1 -- and make sure these levels are set properly during setup.

Can I have more than one R1 Remote connected to a single PS1 Powerstand?

No - Please don't try to connect more than one Remote to a Power Stand (or more than One Power Stand to a Remote) Daisy Chain Remotes?

There are two connections on the R1 Remote. Can I connect two PS1 Power Stand (Classic) / Model Is and control them simultaneously?

No. The two connections are just for convenience to allow for more flexible routing of the remote cable.

You can, however, set up one PS1 Power Stand (Classic) / Model I with one R1 Remote, then unplug the R1 Remote from the first PS1 and plug it into the 2nd PS1 to get that one set up.

The first PS1 Power Stand (Classic) / Model I will retain the settings present at the time you unplug it.

Please note: This will not let you dynamically control two Systems during a performance, but you can at least get them all set up properly even if you only have one working R1 Remote.

Vocals on the Left

I always wire up the Power Stand so that the vocals are in Channel 1. This just means that it's always the same, easy to describe, and one less thing to wonder about. (exception below)

If you've got two players sharing a System, and hence the Remote, take a moment to wire things up so that the Channel strip that affects someone's sound is closest to them.

Here's an idea for a bracket you can mount on the mic stand. Sure, the velcro is fine but ...

See: Bracket for the Remote

...there are two design related issues that come into play here. The reason why nearly nobody knows about this is that rarely anyone ever notices it.

1) The Level knob on the R1 Remote has a certain amount of latency. It takes a moment from the time you turn a knob until the setting actually takes effect. The exact time depends on the circumstances, but it's always less than one tenth of a second which is indeed barely (if at all) noticeable.

2) The Channel 1 and 2 Level controls produce a very slight "zipper" noise when they change between different volume setting. That noise does not affect the tone controls or the master volume. The technical reasons for that are complicated, but I'm happy to explain it, if someone is interested. Anyway, the "zipper" noise only occurs when you actually operate the control, so it doesn't occur while playing unless you play and adjust at the same time. If you need to do that (e.g. for a fade-out) and the zipper is audible and objectionable, you could maybe use the volume control on your instrument or the master volume on the remote.

Again, most people never notice these issues in the first place and if they do, it's rarely a problem of any sort.

See more about Latency and The L1®

LEDs and the Insert Loop

The LED on the remote is after the insert loop. Depending on how much energy the signal gains (or looses) in the loop, the LEDs on the power stand and on the remote get out of sync.

Unfortunately, there isn't any easy way to set an effects processor to "unity gain". Observing the two LEDs might help with that.

In general it's not a big deal if any LED goes occasionally red, since there is still some headroom. Only if you see red pretty frequently, it's advisable to turn down.

Just a little tip: The LED on the power stand and on the remote are calibrated, if nothing is connected to the insert loop. The LEDs are in sync when the channel volume on the remote is at 12 o'clock. Occasional red is fine, since you still have reasonable head room from the point where either LED turns red to when something really bad happens.

Controlling Overall Volume, Using the Remote on Channels 3 and 4

If you are using Channel 1 or 2 for something else already, you should plug both channels from the laptop (or mixer) into channel 3 & 4. Gain staging is a little more complicated: turn laptop or mixer to full volume, set master volume on the remote to 9 o'clock or so (not too loud) and turn up Channel 3/4 level control until some audible distortion occurs and then back up by one notch or so. It doesn't have to be very exact, there is plenty of extra gain in the system if needed.

Channel 1 and 2 Level Controls on the Remote don't mute the channels.

The channel volume controls have about 40 dB gain from all-the-way-down to all-the-way-up but don't completely mute the sound.

Don't put the Remote Control in the outside pocket of the Power Stand gig bag. It'll get hit during transportation.

The gig bag for the upper half of the L1 Cylindrical Radiator® loudspeaker is designed to leave room for the Remote alongside the bayonet; this is a good protected area.

If the knobs get stiff, you can pull them out a bit. Chances are they've just gotten jammed down during packing.

You can get a replacement cable (sometimes known as a 7 pin midi cable). 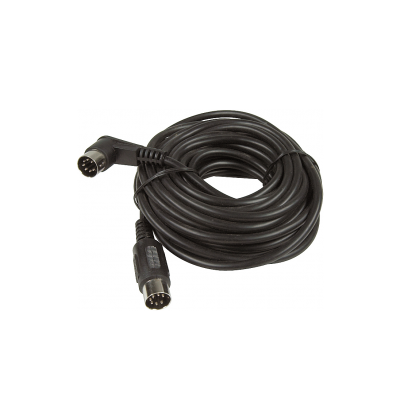