This describes a stage layout with four warm up acts (solos and duos) and a headliner (solo) and a finale with the headliner and two others.

Please Note: I would NOT set up in a corner like this again. It sounded great for the audience but on stage it was a little boomy. For the solution see What I should have done.

The room was approximately 50 x 50' with an extension off the opposite corner. So we were playing to people as far away as 85 feet at the far end.

This is pretty close to scale for the distances, so the performers were about 3-4 feet in front of the L1™s. Not a lot of room given the 2500+ square feet we were trying to fill.

I ran T1™s mounted on each the microphone stands controlling the L1™ directly behind it. I had a Scene worked out specifically for the headliner for the night. He was the only person who had been available for a sound check. I knew roughly what the other performers were going to be using for instruments so I made up generic Scenes for them. For example,

This made it very simple to have people walk up, turn the dial to the appropriate Scene, explain how to use the volume dial and mute buttons, and that was it!

I had set the gain staging and volumes so that nothing was feeding back even when the stage was empty so things went pretty smoothly from that point.

Here is how things looked for the warm up acts that were duos.

I was on the left side as you view this, and found it very bass heavy for my acoustic Guitar. My partner on the other side said it was a little boomy but not too bad. We both had the zEQ settings with the bass at -6.0 db or so. I had the ParaEQ at -12db at 50 Hz with the width at .5.

I play finger style, no picks - so when I dig in, especially for soloing, I get a bit of finger "thump". The parametric EQ really helps with that.

My partner for the night plays mainly with a pick so he doesn't have that issue. 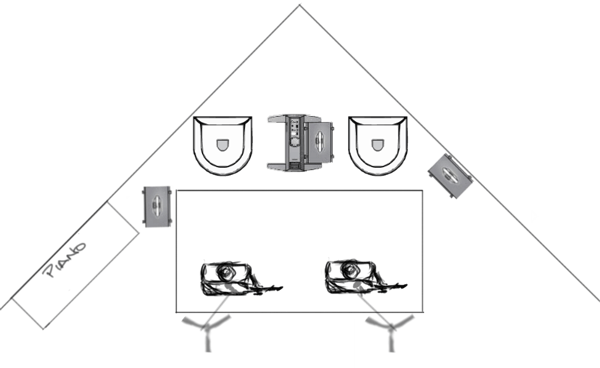 Here is how our headliner looked on stage. He ran through the Model II. 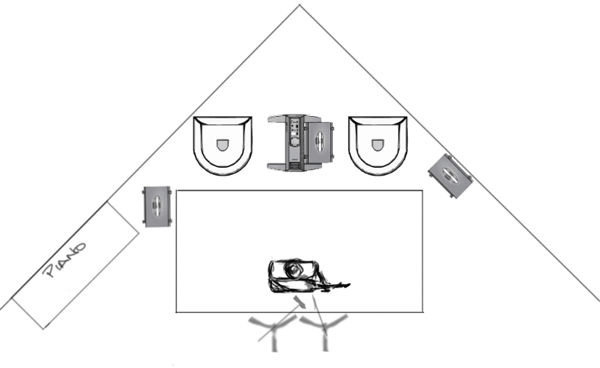 It felt a little bottom heavy but not nearly as much as it did in the duo setup.

We have done other shows where it was just him, with no warm-up acts. We used a single L1™ Classic in the same position as the L1™ above. Things sounded fine.

Minor note: We pulled the other microphone stands off to the sides during this part of the show.

Not shown: There was a T1™ on the microphone stand on the right. Inputs were:

He was all over the stage. He literally dances his way through his set most often like a graceful waltz. When he was 'on the mic' he was really 'on the mic' (close microphone technique). The same was true for the AKG microphone on his Guitar. He used it like an effect. Not all the time, but when there was a particular sound he wanted.

And I know you want to know... there was one little squeal at the beginning of the show as he stepped off the stage to hit the switch for the lights. We reoriented the Guitar microphone so it was aimed as you see it in the sketch above. No issues with feedback for the rest of the night.

Toward the end of the last set our headliner called the owner and me up to the stage. We thought he was going to acknowledge the cause (Cancer research) and the house (the owner's purpose built room for musical performances) and he did. He also mentioned the wonderful sound system and thanked me yet again for doing the sound. But then he surprised us.

It took about 60 seconds to pull the other microphone stands (with T1™s mounted on them) back into the stage area.

Here is how we ended the night. 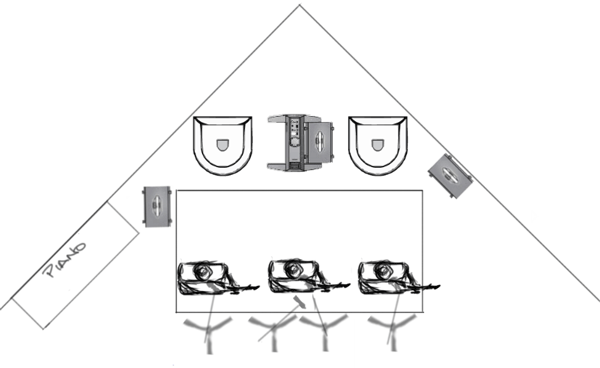 What I should have done

I have should have moved the B1s. Time permitting, a little experimentation would have been good, but this would probably have been better. 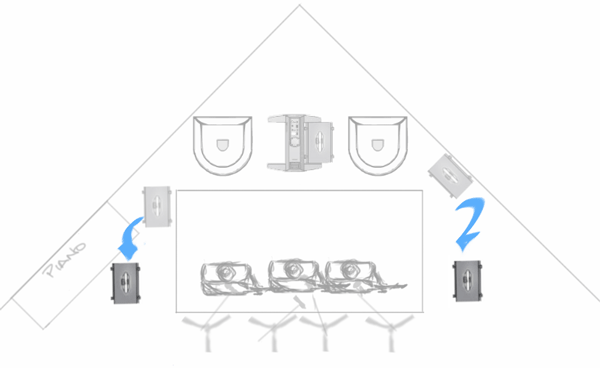