Notes about operating and storage temperatures for your L1® System 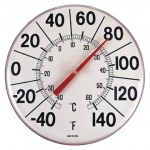 From the L1® System FAQ

Yes. The system can be used inside or outside. However, it must never be exposed to precipitation or extended periods of direct sunlight. In cases of light rain, take precautions to cover the back panel of the loudspeaker. Water must not get into the air inlet slits inside the back I/O panel, handle recess or front grille.

Can I use the system outside?

Heat and Fan in the L1 Classic and L1 Model I

Hilmar-at-Bose speaks about the heat [1]

The PS1 does have fans, but they are only kicking in when you work the system pretty hard. The power amps are very efficient, and a nice side effect of high efficiency, is that there is a lot less heat to get rid off. So unless you are hitting it very hard, the fans will be off and at that kind of volume level, the fans are pretty much inaudible.

Leaving the system inside the bag is perfectly fine. The vents are above the mixer section and if the bag is open enough so you an insert any cables, than its also open enough to get appropriate ventilation.

If possible you should avoid exposing the PS1 (or any kind of electronics for that matter) to direct blazing sunlight. That can generate enormous amounts of heat inside the system to the point where it actually has to shut down (to protect some of the internal components). As a general rule, if it's too hot for you as the performer, than it's probably also too hot for the system. Finding a little shade will certainly help in a scenario like this.

Heat and Fan in the L1 Model II

Starting with units manufactured in late 2014 and later (shipped with Firmware version 1.5), the fan now runs quietly, constantly, while the Power Stand is powered on. This is completely normal.

This is how to read the Serial Number to tell if your system was shipped with Firmware version 1.5 or later.

Note: The grayed out characters may be different on your system.

If the underlined numbers are greater than 4284 then the unit was likely shipped with Firmware version 1.5, after October 2014.

Note: There is no user installable update for units with earlier serial numbers. The earlier hardware is not compatible with firmware version 1.5.

The fan in the Model II Power Stand comes on when the input signal level goes over a certain limit, regardless of what the internal temperature of the unit is. That way, the unit never gets too hot to where a fan needs to be on constantly. Whatever you do, please don't cover up the fan port.[2]

All members of our group at Bose are either musicians or sound engineers (outside their day job), so clearly we know what "road-proof" means.

The system went through rigorous design tests, including 5000 insertion and extractions of the cylindrical radiator(tm) loudspeaker (that's a LOT of gigs & rehersals Wink).

and many, many more.

And yes, there are drain holes in the bottom of the power stand to deal with the occasional beverage accident.

Officially we rate our products (and guarantee operation) down to 0 C. We rigorously torture them down at these levels in unimaginable ways to make sure they work perfectly during the cold and after.

But of course you are asking about -10 C. While we haven't officially fully tested down to those levels I am confident you won't have any problems. The speakers will certainly be fine. The powerstand and electronics will heat up quickly to above 0 C internally and be fine.

If you waned to be extra cautious, when you get to the gig just plug in the L1's and turn them on. Let them run with no sound ('idle') for a few minutes. As I was saying, this will bump the internal electronics temperature up to above 0 C.

In winter, when the outdoor temperature is -39F, the school buses pick up the kids at the road. Unless the wind causes the wind chill factor below -40F then the kids can stay home.

Winter tours are common and most of the gear travels in unheated trailers. The biggest concerns:

In very cold weather I recommend:

In winter when I have afternoon gigs, I load the car at home in the morning and unload everything at my workplace. I reload the car just before leaving for the gig. This way it doesn't take long for the gear to warm up.