Using the Taylor Presets on the T1 ToneMatch Audio Engine

On your T1® turn the rotary selector to ToneMatch.

Under the display, turn the left-most button and scroll through the Categories. 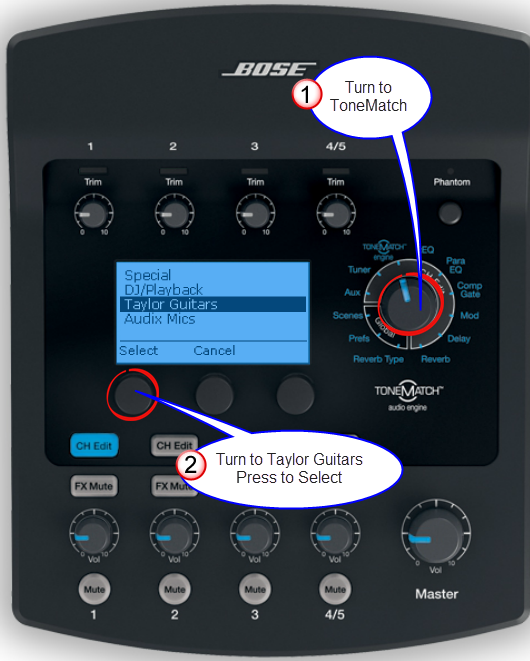 Scroll through the Categories until you see Taylor Guitars, then press the left-most button.

Now you can scroll through the Taylor Presets. 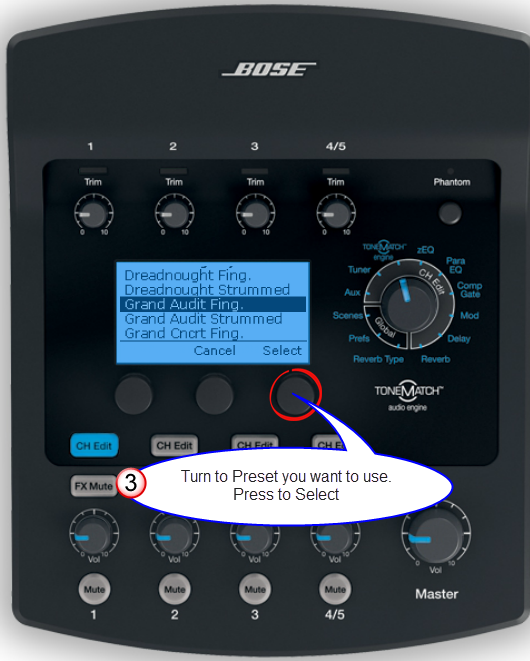 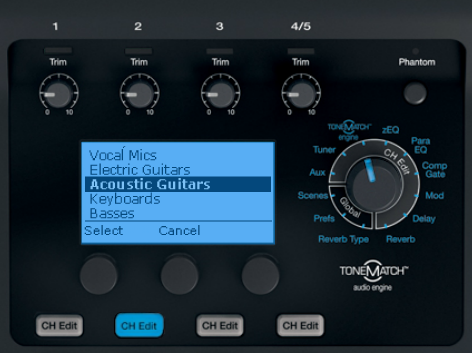 Turn the leftmost knob under the display until you see Taylor Guitars.

then press the knob to switch to the Taylor Guitar category. 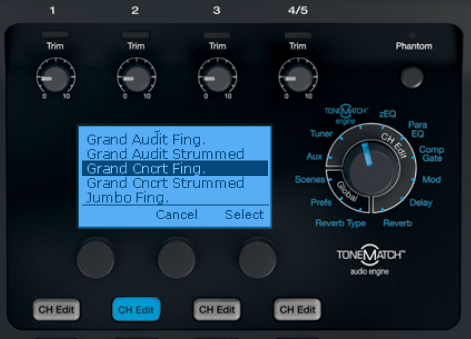 Your Taylor 814 is a Grand Auditorium shape (one of my favourites in the Taylor line) so I'd start here: 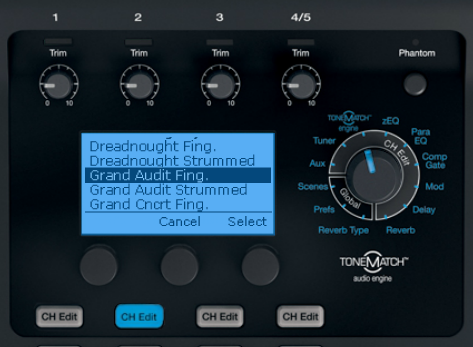 And you'll probably hear a difference between Finger style and Strummed.

But run through all of them and see what you like.

As many of you know we have Bose created presets in the L1™ system so that we can bring to musicians this idea of “completing the system”. Presets have really resonated with owners as a cool part of the system and we started working on more. We approached the good folks at Taylor with the idea of creating presets for their instruments and they jumped in with both feet. Their engineers worked with Cliff to develop presets for the different body styles of Taylor guitars and the results of that work are ready for the world.

Now, some of you know that we’ve done this with other companies, but Taylor got their communications team into it and they said “Let’s tell this story. Our owners will be interested in hearing about this.” We said, “Okay!” and we went to work putting together a video that tells this story.

On the web site (http://www.bose.com/musicians) you can view a video (soon to be a free DVD) that talks about the work we did together. We are also planning to include this information in some emails, a Harmony Central press release, etc. so that we can let musicians know about these new presets. We’ll also add more info to the Bose website as we finish up the ToneMatch for Taylor story.

So what is a “ToneMatch™ preset” versus a “preset” … why the fancy name?

Well, to me, there is a big difference between a ToneMatch™ preset and what I’ll call a “Bose preset”. A ToneMatch™ preset is one where Bose and another manufacturer, in this case Taylor, work together to optimize the sound of the instrument (or mic) when it is connected to the L1 speaker. A Bose preset is one where Bose, independent of the manufacturer’s input, creates a preset for a mic/instrument/pickup connected to the L1 speaker.

I know that may be subtle to many of you, but to me it’s a big difference. It’s really putting the controls in the hands of the “tone creation” experts and guiding their choices (not deciding) and we play the role of the “tone distribution” experts. To me, as a musician, it’s like bringing Taylor and Bose to your gig and saying “Guys, get it sounding great and I’ll take it from there.” My totally biased opinion is that this is a great benefit to musicians.

How do you get the presets? Well thank you for asking ...

If you’re an L1™ owner and interested in getting a preset upgrade disk with ToneMatch presets for Taylor guitars, simply call (800) 905-0894 next week and we’ll send it out to you