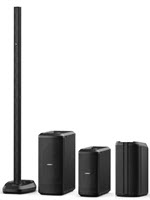 Question
What benefit will there be adding a Sub2 to an L1 Pro32 with a Sub1?
Answer
The result will be almost the same as running the Sub2 alone. The Sub2 plus Sub1 is only slightly louder than the Sub2 alone.

Testing, testing
I have an L1 Pro32 with Sub1, but not a Sub2. Instead, I connected an L1 Pro 16 power stand to the L1 Pro32 line out to simulate adding a Sub2. Then I cranked up the volume on everything. I turned the Sub1 off/on and heard almost no difference. The L1 Pro16 drowned out the Sub1. I expect the result would be the same with a Sub1 and a Sub2; the Sub2 would drown out the Sub1.
The math: If you run a Sub2 and add another Sub2, you can expect up to +6 dB SPL. You get +3 dB from doubling the power and up to +3 dB by doubling of acoustic volume, cone area and close coupling between the speakers.

However, if you run a Sub2 and add a Sub1, you 'might get up to' +3 dB SPL, because you are adding less than half as much power and half as much surface area. I expect the gain is less than that.

If running two L1 Pro32 with Sub1 systems and wanted to add more bass, I would do one of the following.

I have two L1 Pro32 with Sub1 systems. I chose the Sub1 option for portability.

I have two L1 Pro16 systems. I chose these because they have the J-shape projection pattern (good for playing on elevated stages) AND the output to the bass transducer is 1000 watts RMS (similar to the Sub2). My plan was to use the L1 Pro16 power stand in place of the Sub2 in situations where I needed more bass than the Sub1 could provide.