If you are considering the L1 Pro16 and L1 Pro32 and trying to understand which is a better choice for you, then keep reading. I'll tell you what I considered as I pondered this question.

I've enjoyed both the L1 Model 1S and the L1 Model II for over a decade. I mention these legacy models because they are the predecessors to the L1 Pro16 and L1 Pro32. This is how I used them and why I was interested in the new systems. Getting either of these new systems would mean replacing the older ones. 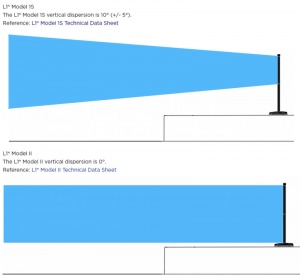 L1 Model 1S Compared to L1 Model II Vertical Dispersion
I got the L1 Model 1S with B2 bass module in 2012. The reasons:

I got the L1 Model II with two B1 Bass Module bass modules and T1 ToneMatch Audio Engine in 2009. For solo work, I sing and play acoustic guitar (or electric guitar). Most often I would use a single B1 Bass Module. For larger shows or outdoors, I would use two B1 bass modules. When playing in bands, I bring the same equipment but I generally play electric guitar with a Kemper Profiler. I don't need much bass because I've got a rhythm section (bass guitar and drums). In most band settings, we set up an L1 for each performer. We would use up to four B1 bass modules for bass guitar or drums. When the B2 became available, we would use that.

Both the L1 Pro16 and L1 Pro32 have three channels (two with ToneMatch Presets, Tone controls, and Reverb). The third channel can receive Bluetooth audio or line-level inputs. Both units can be controlled using the L1 Mix App, and you can connect a ToneMatch mixer to the ToneMatch port. 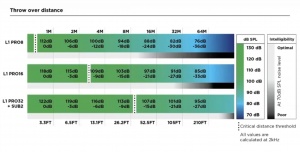 The L1 Pro16 is a convenient, all-in-one package with a surprisingly small footprint on the stage taking only 14 x 18 inches. That's slightly over half of the stage area of older full-sized L1 models. They were 26 x 26 inches.

It provides more bass than the legacy B2 bass module even though the power stand weighs only a few pounds more. It uses the same 10 x 18" racetrack driver as the Sub2 subwoofer option with the L1 Pro32. 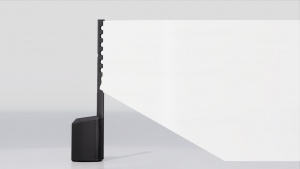 L1 Pro16 J-Shape
The L1 Pro16 has a J-shaped array. It provides the best coverage (of all the L1 models) for audiences below an elevated stage.

If all my gigs were in venues up to 75 feet the L1 Pro16 would meet my needs. I prefer to have the L1 behind me on stage, and prefer not to run my stage volume above 100 dB SPL. At 75 feet, the projected volume drop is approximately -24 dB. See the coloured chart below 'Throw Over Distance'

The L1 Pro16 downward coverage makes it the best when some or all of the audience is below the stage.

In many venues, you can run the L1 Pro32 at a lower stage volume than the L1 Pro16 (and L1 Pro8) and still reach everyone.

In this example adapted from the Throw Over Distance chart, our objective is to be heard at 82 dB SPL at 32 meters (100 feet). To reach this goal: 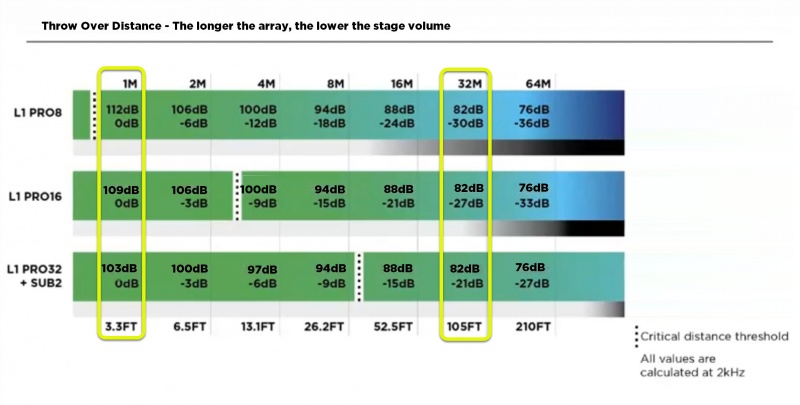 Scale Up or Down

You have several options with the subwoofers to scale to your needs with the L1 Pro32:

Separate from the L1 Pro32 for Flexibility

The subwoofers are separate from the power stand. This means you can position them for optimum results for the venue. For examples:

Raise and Lower the Bass Independently

The Sub1 and Sub2 have a separate level control.

Start with the control at 12:00 o'clock (Unity). Then fine-tune the balance of bass frequencies with the mid-high frequencies covered by the L1 Pro32.

Does the Array Out-distance the Subwoofers? 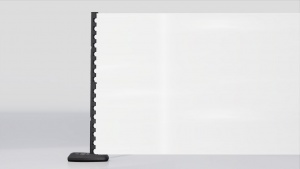 L1 Pro32 Straight Pattern
There have been some discussions online about the L1 Pro32 array being able to outdistance the Sub1 or Sub2. You may experience this outdoors or in applications where you are running at a distance at high volume.

The Sub1 and Sub2 are point-source loudspeakers. The volume drops off at about -6 dB SPL for every doubling of the distance. The L1 Pro32 portable line array drops off at about -3 dB for every doubling of the distance (up to the critical distance). As you move farther away from the system, the volume of the subwoofer will drop off faster than the line array. See Bass Outdoors for a discussion of the concepts.

Other Benefits of the Longer Array

The L1 Pro32 has a much more gradual drop in volume over distance compared to the L1 Pro16. You don't have to be playing loud or to a distant audience to experience the benefits.

Use the L1 Pro32 for the even volume from the front to the back of the venue. This means you can run at lower stage volumes, play at moderate levels (not blast people close to the stage), and lower the likelihood of microphone feedback.