If you are considering the L1 Pro8 and L1 Pro16 and trying to understand which is a better choice for you, then keep reading. I'll tell you what I considered as I pondered this question.

I've enjoyed both the L1 Compact and the L1 Model 1S for over a decade. I mention these legacy models because they are the predecessors to the L1 Pro8 and L1 Pro16. This is how I used them and why I was interested in the new systems. Getting either of these new systems would mean replacing the older ones.

I got the L1 Compact in 2009. At times I had three. One of them lived in the trunk of my four-door sedan. It was small and light, and I used it several times a week for small gigs indoors and outside. I used it as a monitor when playing on stages where there was a house system. It served as backup to my other gear. Although I never had to use it to replace another piece of L1 equipment, I have bailed out other people with it when their gear went down.

The L1 Compact worked well for up to fifty people when the background noise was light. The single 8-inch woofer goes down to 65 Hz, and this is fine for vocals and guitar. It was also good for pre-recorded music for backing tracks or background music. I have run electric bass through it in small venues. 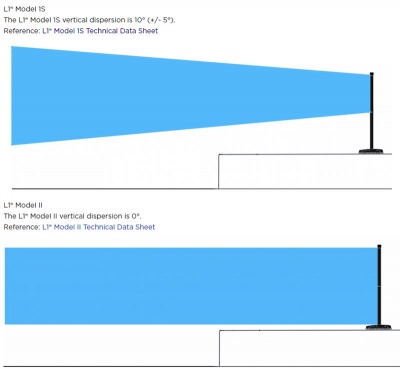 Both the L1 Pro8 and L1 Pro16 have three channels (two with ToneMatch Presets, Tone controls, and Reverb). The third channel can receive Bluetooth audio or line-level inputs. Both units can be controlled using the L1 Mix App, and you can connect a ToneMatch mixer to the ToneMatch port.

If all my gigs were acoustic-oriented, singer/songwriter events performing for attentive audiences, the L1 Pro8 would be great. The 31-pound power stand is only six pounds more than the L1 Compact. Add the Cylindrical Radiator and extension, and the total system weight is 40 pounds. The footprint is only slightly bigger than the L1 Compact. For larger venues, I can use the L1 Pro8 on stage and run a line out to the house PA (if there is one).

The L1 Pro16 line array is twice as long as the L1 Pro8. It is driven by a larger amplifier and provides higher volume and lower drop-off over distance.

The L1 Pro16 downward coverage makes it the best when some or all of the audience is below the stage.

I got both models because I need the unique benefits of the L1 Pro8 for some situations and the power and bass response of the L1 Pro16 for others.