Here are some tips and tricks to get the most out of your ToneMatch Mixer.
This article applies to all ToneMatch mixers (T1/T4S/T8S).

The technique takes some practice and experimentation. But the effort is worth it because the technique can be used in many different situations.

You'll be using the parametric equalizer on the T1 ToneMatch Audio Engine to improve vocal microphone feedback. The parametric equalizer has a frequency adjustment to select the pitch (note) you want to shape, and a boost or cut adjustment to increase or decrease that pitch like a regular tone control. It also has a bandwidth knob, to set how wide a range of pitches around the single pitch you are adjusting. 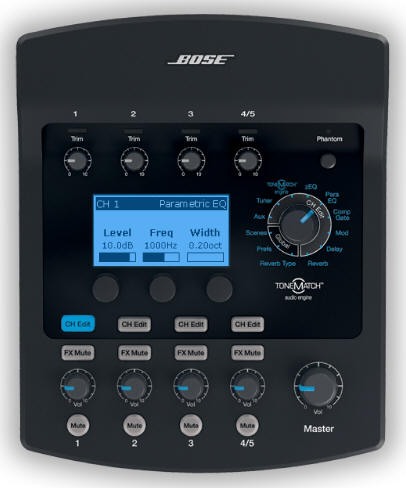 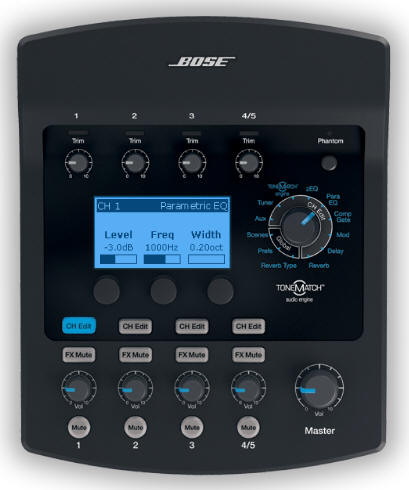 Once you know the frequency for one microphone (and the T1 tells you this in Hz), you can start by applying the same notch to other microphones -- but you may find that some adjustments are needed for each due to differences in the microphones and their different locations.

How much does this hurt the sound? You should experiment a little, since -- it depends. The notch will have different effects on the tone depending on how deep it is (how much you cut), how wide it is (keep it as narrow as you can), and where it is relative to your voice or instrument. Use your ears to tell you if you've gone too far.

This technique was described in a field report by Bill-at-Bose.

Here is a video about the relationship between the ToneMatch Presets, zEQ, ParaMetric EQ.

Use the CompGate - Noise Gate to effectively mute the microphone when there is not a strong vocal.

You will have to experiment to find the best setting.

It seems so obvious now that the Noise Gate is the answer; still, your post prompted my epiphany. We play electric and definitely louder than an acoustic act. (ex: I use either two customized Blues Jr's in stereo, my '65 Super Reverb, or my ProTube Twin Amp on stage) The tonematch's Noise Gate solved the feedback resulting form my need to push the vocal mike to the max. Also, I don't have to stand in between the microphone and the Bose to avoid that ensuing ring. The band was awestruck by my the improvement in my "mixing prowess". Of course, I didn't tell them that you cued me in. Thanks, (and don't tell anyone you told me, ha!)

You can use the Parametric EQ feature to notch out a problem frequency. Here are a few real-world examples.
This article applies to all ToneMatch mixers (T1/T4S/T8S).

Bassist With Excessive Resonance at B flat

Another Approach to Eliminating a Boomy Note

Hilmar-at-Bose had a different approach[2]

b) set the width to fairly narrow, say .25 octaves

Once you have centered on the frequency you adjust the level and width to taste.

Here is a cheat sheet: Frequency vs. Musical Notes Graphic from MIT

If you have an Acoustic Guitar that is picking up low end thump from a percussive right hand technique use the Para EQ with settings like this.

Use the Noise Gate

The default settings seem to work okay for me.

Wind noise has a large amount of low frequency (bass) content, often described as “rumble.” Cutting out the extreme bass from a microphone signal is an effective method to reduce audible wind noise.

Use the ParaEQ (Woody B called it the notch filter)

I had an extremely windy gig last night. Even with windscreens on the mics they still had the wind rumble. I used the notch filter on my T1 to notch the wind sound out. I don't believe it's called a notch filter on the T1, but I don't remember the correct name. I just turned the volume way up, and adjusted the frequency until the wind noise was gone. I tried using the noise gate, but if it was high enough to eliminate the wind it also eliminated most of the vocals. Usually wind screens solve any wind problems I have, but the wind was so strong I kept my guitar case on stage to sit my guitar in, instead of using a stand. I believe the wind would have blown it over.

What to do in windy conditions - Woody B

At the recent L1 users conference in Colorado, we found out that a high percentage of T1 owners did not know about the BYPASS feature that's employed in many places in the T1.

The BYPASS feature is extremely useful in deciding if a particular adjustment is giving you the sound you want. It's a form of an A/B switch.

As an example, here's the screen after you've chosen a Tonematch preset for Channel 1. In this case, I've chosen the preset for an Audix OM5.

To go into bypass mode, just click on the rotary-push knob below the word "category" on the screen.

Here's what the screen looks like after you push the button. 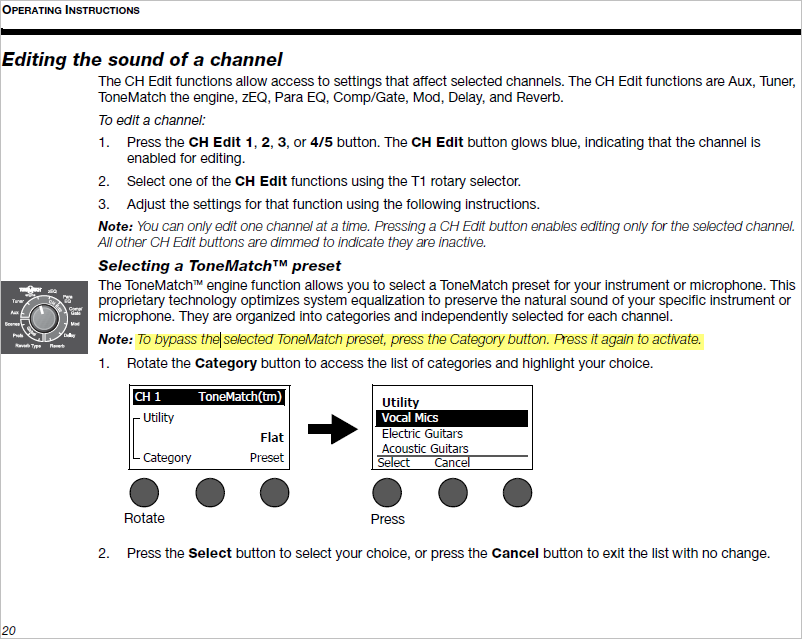 What Happens When You Bypass a Preset?

What happens when you select a channel ‘Bypass’ button on the T1® audio engine?

Pressing the ‘Bypass’ button on a channel will change it’s current ToneMatch® preset to the generic “Utility Flat” preset. This enables you to audition between specific ToneMatch® presets and the ‘Utility Flat’ setting, helping you decide which preset you will ultimately choose.

In contrast, the key frequency adjustments for zEQ do not change when the ToneMatch® preset is ‘Bypassed’. For instance say that you originally had a ‘Kick Drum’ preset selected and then pressed ‘Bypass’, the key zEQ adjustment points would still remain focused on fine tuning a kick drum.

To bypass a zEQ setting on your T1® 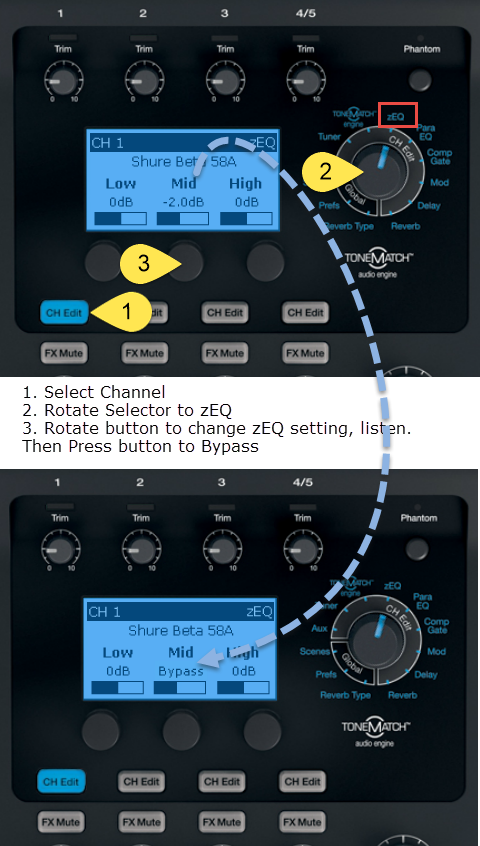 Use this to compare the sound with and without a zEQ setting to really hear what the zEQ is doing to the sound in the room.

To bypass a zEQ setting on your T1®

Use this to compare the sound with and without a zEQ setting to really hear what the zEQ is doing to the sound in the room.

Mary (Banshee in the Kitchen) noted [1]

The main trick for me was to remember to hit the channel edit button for the instrument you want to change. For instance, I'd be playing guitar and want to tune in between numbers, so I'd crank around to the tuner and wonder why it wasn't picking up my signal well. Well, I'd been playing with my 12-string settings a while back and that Channel Edit button was still pushed, even though I'd gone on to playing another instrument.

I'm going to develop the habit of hitting the Channel Edit button before doing anything instrument in hand.

Do you mute the "unused" channels when you switch instruments ? If you do, you could try to make a habit of hitting the "channel edit" every time you take a channel out of mute. I've tried that a couple of times when switching basses and it works fairly well for me. I do

This way I don't even have to touch the volume controls on the bass and can go directly back to where I was.

One Source to Two Channels

If you have one source like a cable that you switch between two instruments, or a wireless receiver with two transmitters you can split that input to two Channels. The reason for doing this is to have two different settings - one for each instrument.

Use the CH Mute buttons to control which Channel is active.

I usually run my vocal microphone to Channel 1 and the Guitar to Channel 2.

Expect that the signal coming from Channel 2 Preamp out will be hotter than your original Guitar signal. That's okay. I ended up with the trim on Channel 3 lower than on Channel 2. But it all worked fine switching back and forth by hitting the CH Mute buttons.

Use the T1 ToneMatch® Audio Engine with a non-Bose PA

If your mystery system is voiced to a normal-sounding spectral distribution (like the L1's), the presets in the T1 will work fine. If not (a really good probability, especially if it's an odd-brand "installed" system), all bets are off. Actually, even if it's a really good installed system but all the controls (like the house EQ) are readily accessible, chances are this will fall into the "not" category too. In either case, the loop is wide open at this point. Might as well leave the T1 in the car.
-- Cliff-at-Bose [2]

What Cliff is getting at is the fact that the house system may be 'voiced' any number of ways. In almost all cases a house system will be voiced quite differently from an L1, which will make the presets sound much differently than intended.

We just don't know what will happen. The presets may work great, they may not work well. No way to tell until soundcheck.

Bring the T1 though - worst case scenario is you leave your EQ's flat.
-- MikeZ-at-Bose [3]

There are several less than obvious things you can do with effects through the T1 ToneMatch Audio Engine.

Assume that you are using Channel 1 as the input where you want to do this:

Assume that you are using Channel 1 as the input where you want to do this:

First up hook up your vocal mic to, say, Channel 1 on the T1®. Next take a jack lead and connect it to the PRE AMP out on Channel 1. Take this lead and run it through either a keyboard style volume pedal or a make or break style footswitch. Run the signal from the pedal/footswitch into another T1® channel and set this channel up with the chosen vocal effects but make them 100% effect. Adjust the effected channel volume to get the desired blend of dry vocal to effected vocal. The pedal/footswitch will determine how much or if any signal will go to channel 2 and therefore whether or not an effect is added.